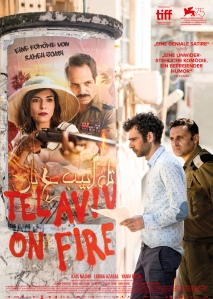 Salam lives in Tel Aviv, and every day he has to pass through the border controls to work on the Ramallah-based soap opera Tel Aviv on Fire. He’s got the job largely because his uncle is the producer, but nepotism is everything, so when the author leaves in a hissy fit, Salam is suddenly promoted,

He has no idea how you write a screenplay, but there are plenty of people who want to contribute. The main actress keeps threatening to up sticks and leave for Paris if she doesn’t get better lines. Salam’s uncle Bassam is a veteran of the 1967 war, when the soap is set, and wants more explicit scenes of the Palestinian liberation struggle. And then there is Assi.

Assi is the army officer in charge of the checkpoint through which Salam must pass twice a day. He doesn’t watch the soap himself, as he sees it as anti-semitic, but his wife is a big fan, so he asks Salam to provide more heroic lines for the Israeli army commander. And while he’s at it, could he just smuggle a photo of Assi in front of the camera…

It is all mildly amusing, without being laugh-out loud, and its amiable enough. There’s also a subplot of Salam trying to win back his ex-girlfriend, which never really set me alight, but could be ok if you like that sort of thing.

The trouble is, you can’t really assess a film set in Jerusalem and Ramallah without mentioning how it addresses the Middle East conflict, and here the results are mixed. The film is keen on putting its light satire of soap operas at the forefront – which is fully legitimate, We don’t expect every film set in modern-day London or New York to have a fully fledged analysis of the 2008 banking crisis. Yet you can’t casually feature border controls and armed searches of cafes as if they are incidental to the plot.

To a degree, the assymetry of the situation is acknowledged. It is Assi who confiscates Salam’s passport, which means that he can’t travel home in the evening and has to sleep on set. Salam also explains how his love of tinned hummus is a result of the weeks under siege in the first Intifada, when there was nothing else to eat. Yet there is also a tendency to portray the conflict as belonging to the older generation, and as something that could be solved by everyone watching tacky soap operas together.

And here is the other problem. There are some cheap laughs to be won by parodying daytime soaps – and these are indeed won, but its nothing really that wasn’t done better by films like Soapdish and Nurse Betty which (1) were released decades ago and (2) are now largely forgotten (though I confess to a lingering fondness for Nurse Betty). So, the location is really the only thing that’s particularly new here.

File under: maybe something to visit on a wet week-end afternoon, but if you don’t manage to see it, its no huge loss.