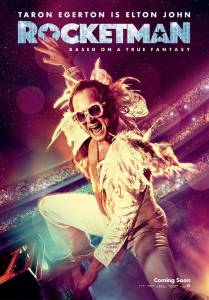 Well, first things first. It isn’t as terrible as Bohemian Rhapsody. And this is despite the crude pop psychology, the little kid asking his father why he won’t hug him, and the getting the songs in the wrong order. Actually, the getting the songs in the wrong order isnt as critical here. Where Bohemian Rhapsody only really showed the songs at concerts and recording sessions, Rocket Man prefers the Mamma Mia approach of finding a song who’s lyrics fit the current scene, which is nowhere near as annoying as it could have been and sometimes works quite well.

Having said that, when they’re in the offices of the manager who just might give them their big break, playing I guess that’s why they call it the Blues which came out years later just seems so unnecessary.

That’s all minor quibbles, though. The main difference between this and Bohemian Rhapsody is that there is some real substance here. And casting the bloke who once played Eddie “the Eagle” Edwards may just prove to be a masterstroke. In both cases it’s the story of an unassuming kid from the provinces who seems just too shy for superstardom but somehow gets there through gritty determination.

There’s a telling scene here of a thoroughly depressed and off his face Elton teaching himself to fake a showbiz smile, a move that he repeats later on just before going on stage.

The acknowledgement of the emptiness of superstardom is handled much more subtly that we have a right to expect. I can’t remember a music biopic where the musician is not just unlikeable for most of the time (in his own words “I became a cunt in 1975 and forgot to stop”) but also the film is quite happy to say that he produced a heap of very bad music (in this case, coke-addled bland MOR).

It’s a film that’s slightly limited by its conventions – lots of highly choreographed dance sequences and people bursting into song, which is all right if you like that sort of thing but is never going to come close to the heights set by West Side Story all those years ago, but as a film of its genre it’s better than most.

A couple of nice cameos by actors enjoying the chance to chew the scenery, and it walks the line carefully between portraying being gay as being perfectly fine, but not always easy in a homophobic world.

It probably takes itself a little too seriously and is slightly too influenced by psychobabble, but it keeps you on board for most of the time, so you don’t need to think about the riduculousnesses too hard. And, dare we acknowledge? Elton’s songs (at least in the early 70s) were pretty damned good