Frank Zappa – A Jerk with many talents 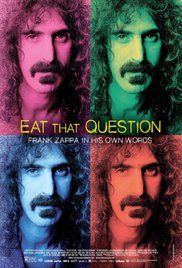 Frank Zappa – Eat That Question uses forgotten film extracts to introduce us to the man, who many know only from posters in the toilets of shared flats. Phil Butland finds the entertaining review of the musician ‘s work worth a visit

At some point in Thorsten Schütte’s new documentary about Frank Zappa, the musician and composer talks about his reputation: “Very few people know me at all and if they do, then mostly as the guy with the moustache, who sometimes appears in TV debates. Almost no one has heard my music.” That was about thirty years ago when you could actually occasionally see him on TV. Now that he has been dead for more than twenty years, it begs the question: do we really need a film about Frank Zappa?

What about the music?

Schüttes film gives us some good reasons to still take Zappa seriously. In his media appearances Zappa is always articulate and intelligent, but perhaps the biggest surprise of the film comes from the music. Most people who know Zappa’s music at all, generally do so because of throw-away pop songs like “Bobby Brown”. Here we are suddenly confronted with complex jazz and classical pieces that deserve more attention.

Nonetheless, the focus of the film is on the man and his ideas. Like his music, Zappa’s opinions were not always easy to pin down. A convinced antifascist who compared the radical left with Nazis. A fighter for freedom of expression – in particular, his own freedom to make dumb sexist and homophobic jokes. Zappa has a proud record of fighting against the reactionary right, yet at the same time was a brutal bandleader who hated trade unions and proudly tells tales of how he has sacked countless musicians.

Zappa’s political beliefs can perhaps best be described as ‘libertarian’. He hated inequality, but believed that it should be fought not with solidarity, but by individual actions of particularly talented people. People like, for example, Frank Zappa. Asked why his music was not more successful, he replies, “People are not accustomed to excellence.” In interviews, he was usually supercilious and disdainful, although given many of the stupid questions that were put to him, his disdain was not always unfounded.

In the realm of the stupid

Zappa’s description of the US under Ronald Reagan’s presidency is reminiscent of many reports from the country of President Trump: “We are culturally nothing, we mean nothing …We as a nation have chosen cheese as a way of life…. we have Levis, hamburgers, REO Speedwagon, Journey, [editor’s note: both 1980s rockbands] neutron bombs and poison gas.” Such tirades are great fun and highly entertaining. Nonetheless, they reveal a political problem.

Like many today who criticize Trump voters, Zappa seems to regard the majority of the population as idiots who are unable to make informed decisions. There seem to be two sorts of people in society, but the gap is not between the 99% and and the 1%, still less between workers and their bosses. For Zappa, the big division in society seems to be between a few Frank Zappa fans and the stupid masses who prefer to listen to REO Speedwagon.

Despite his tendency to fight his own fights, and his rejection of hippy idealism, Zappa is often inspiring, not least in his fight against censorship. In 1985, four wives of leading US politicians founded the Parents Music Resource Center (PMRC), allegedly to protect children from violent and over-sexualised song lyrics. Songs and albums that they didn’t approve of were denied radio airplay and marked with a so-called “Parental Advisory” sticker. Retail chains like Walmart – where most records were bought in the USA at the time – refused to sell such records. The end result was not only that children were not allowed to hear them (which is questionable of itself). In effect, if you didn’t live in a big city with independent music shops, you were denied access to such music.

A group of musicians – with Zappa and the country singer John Denver as their figureheads – fought this censorship and testified in the US Senate. The film shows some of these hearings – and as far as I’m concerned it could have shown much more. With the right opponent in his sights, Zappa could ridicule the deficiencies in their arguments to devastating effect. His appearances before the Senate are pure theatre.

The other side of Zappa

Away from the big stage we also see another Zappa, who comes across as both sympathetic and modest. When an interviewer asks him about his legacy, he seems honestly surprised to have to think about it, and eventually says, “That is not important.” He also is appalled at the idea of producing music for financial gain: “if you think ‘will this make money?’, that’s not an artistic decision. That’s a business decision”

Here we see Zappa in all his contradictions. A successful businessman who rejects the world of big business. Or, looking from the other direction, a talented musician whose audience was too small during his lifetime and is now getting even smaller.

So do we really need a film about Frank Zappa? I think so. Even if he’s not always right, what he says is never uninteresting. And maybe it is worth the effort to give the music a chance – even, or maybe especially the pieces that were somewhat hard on the ears first time round.