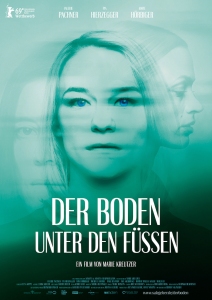 Lola is a Powerfrau. She has one of those jobs which has you wearing a grey suit to conference rooms where you spend most of the time typing furiously into your laptop while ignoring the persistent buzzing of your phone. We later learn that she is one of those people who are sent into companies to sack people and look impassively as the poverty-stricken single mothers who have just lost their jobs fall apart.

When she’s not dialing in an order for new templates in the middle of the night, Lola furiously pedals the exercise bike in the company gym, which has Fitter, Happier, More Productive on its wall, just like in that Radiohead song. She also occasionally sneaks into a hotel room or the toilets with her (female) boss, but their relationship looks increasingly more functional than loving.

Lola’s life is shaken, as they say, when her paranoid and schizophrenic sister Connie in Vienna is sectioned following an overdose. Only it doesn’t seem to be much shaken at all. She refuses to let anyone know that she even has a sister, and her main concerns seem to be about whether Connie’s psychosis is hereditary.

What happens then is not much really. Or rather the same thing with slightly different variations. This is not necessarily a bad thing. I was rather fearing that Lola and Connie would learn from each other’s weaknesses and it would all end in a group hug where no-one got hurt. Instead we move inexorably towards deep tragedy – is there anything more heartbreaking than a funeral attended by one person?

Yesterday’s film tried to pass mental illness off as a fashionable fad – the ennui of the bored middle class. Connie’s depression is life threatening and debilitating – more so because she becomes dependent on the sister who is unable, and unwilling, to support her. When she’s outside the office and gym, Lola is equally unable to deal with life. She is confused when a beggar calls her a rich whore for not giving her any money but refuses a large note when they meet later. Used to robbing people of their dignity, she has none of her own.

You could read “Der Boden unter den Füßen” as a special pleading for the rich – look they get alienated too – but I think its more subtle than that. Valerie Pachner plays Lola as someone who is very believable but not at all likeable. And kudos for having leading characters who happen to be gay without their gayness being used to drive the plot forward. We also see how sexism is driven from above – its the female bosses who decide to give the good jobs to men so as to give a “good impression” to their clients.

I went into this film not knowing anything much about it at all. I came out, very glad that I’d given it a go.