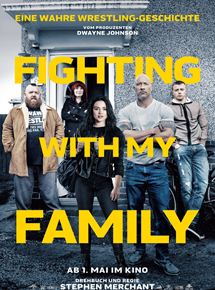 One of those films that’s based on a true story, which immediately loses some of the tension as they rarely make films about people who just give up. So while it tries to ratchet up our concern about whether the “freak from Norwich” will make it as a female wrestler in the states, you kind of know everything’s going to be ok.

Notwithstanding this and a little too much sentimentality, it tells an interesting story. It’s about small-time wrestling in East Anglia versus US megadomes, about Big Daddy vs Hulk Hogan, about pantomime on World Of Sport on a Saturday afternoon vs storytelling in spandex.

It is also about a low budget channel 4 film versus the latest multiplex blockbuster, and while you understand the desire of the working class wrestling family to make it big in the WWE, you also feel that any success is tainted with compromise. Paige may be gothier than the ex models and cheerleaders who she’s fighting, but you just know that if she didn’t have some sort of good looks she’d never get as far as she does.

Sometimes the prevailing moralism (don’t prejudge anyone because they’re all nice people really who may have children or something) may cloy, but there are as many good jokes as befit something written and directed by Stephen Merchant to pull it through. And plaudits are due to Dwayne ‘the Rock’ Johnson playing himself with a suitable sense of his own ridiculousness.

There are many reasons to think that it shouldn’t work, but spmehow it does, and in the main very well indeed.