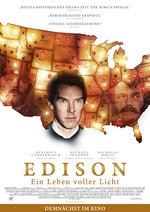 What do you know about the discovery of electricity? If you’re anything like me (and let’s hope you aren’t), it’s not much more than a vague argument about who should really be credited. Was it Edison – populist, liked to claim credit for what other people had done, US-American? Or was it Tesla – foreign? (we don’t need to say any more, do we?)

So you’d expect a film whose English title is “The Current War” (geddit) to be about the battle between Edison and Tesla, right? Wrong, unless you’re really prepared to stretch a point. Tesla does get the occasional walk-on part, but the fight we watch is between the CEO of Edison Electric PLC and the entrepreneur George Westinghouse.

This is the most ideological film that I’ve seen in a long time, by which I don’t mean that it sets out a specific argument. For large periods of time, its hard to figure out what its trying to say at all. For others, you kind of get what the dispute is – usually, is AC power better than DC? – but its hard to keep up an interest. There are a lot of words in the film, but very few of them are interesting.

The ideology lies more in the thoughtless assumptions about what is important. We’ve already mentioned how it pushes anyone who’s not a US-American to the back of the stage. And then there is the sheer opulence of it all. Most scenes take place in the luxury coach of a steam train, or in a ballroom under chandeliers or in a room of men in moustaches and top hats playing snooker.

This is a film about science that doesn’t seem to be interested very much in the science that is depicting. What is important is getting the right marketing which will win the best financial backers. It is unsurprising that the business magnate Samuel Insull and the banker JP Morgan have significant parts. It is a film with the artistic integrity of a balance sheet.

There are moments when it threatens to get interesting. Edison tries to undermine Westinghouse by helping with the development of the electric chair behind the scenes, with the understanding that all correspondence will be destroyed. That way, he can lay the blame on Westinghouse’s AC current and keep the reputation for integrity that he won by refusing to deal with the military.

But its all handled so dully, with camera shots which do nothing more than draw attention to themselves and flashbacks that have no impact on the plot apart from making everything run even more slowly. Moral dilemmas are raised, but then are dismissed because we need another shot of people playing snooker and talking about money.

And then there is the Cumberbatch problem. Now, cards on the table, I know he’s a posho but I’m usually a fan. I think that our Benedict has a great ability to play arrogant rich people who are not the sort of person you’d like to meet on a regular basis but they still have a certain obsessive charm. Above all, there’s a certain playfulness about many of his characters that has you sit back and enjoy the performance.

Not this time. It may be that he was spending most of his concentration trying to give a half-decent US-American accent (it’ll do, but it would have been easier casting someone from the States). This means that he is never able to glow. It’s one thing for him to tell his assistant “you’re like me, but human”, but the problem is not that he lacks passion, but he seems to have no emotions at all.

This is the sort of film where you often end up saying it had the hallmarks of a great film if only it had been handled better. But while I agree that the direction was sub-par, I’m not sure that there was enough of interest here to start with. Given a choice between instructing scientists and entertaining people paying for the plush sets, it fails to address either audience. Instead it just makes an important discovery seem somewhat trivial.