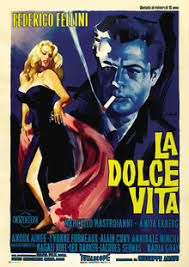 The skies above Rome in black and white. Two helicopters are flying above some tower blocks. The kids who live in the tower blocks point up and run in pursuit. One of the helicopters is carrying a statue of Jesus with arms outstretched. The other contains a journalist, Marcello, and his photographer Paparazzo. As the helicopter swoops above a group of women sunbathing on the roof of their building, Marcello asks for their numbers.

There’s a lot of this sort of thing in La Dolce Vita – scenes which seem Deeply Meaningful and look stunning, but are never referred to again. Later we’ll see Anita Ekberg in the Trevi fountain, a striptease act at a party and a strange marine creature washed up on the shore. If its your sort of thing, you may try to work out the metaphorical significance of such scenes, but I think its better to just take them as what they are – elegant pieces of cinema.

Marcello’s job seems to consist of driving round Rome in shades and a suit, chatting up women and following them to parties in rich people’s houses and castles. And yet his life seems to be plagued by existential angst. This is the 60th anniversary of a film first made in 1960 as all the old certainties of the post-war boom were starting to pale, and its not sure whether or not this is a good thing.

The film shows the lifestyle of the decadent rich, but is ambiguous about whether it endorses this life. The numerous parties appear to be joyless, especially for the women. Marcello has a difficult relationship with his partner Emma who fears – not without grounds – that he won’t stay with her. Yet for all the affairs he has on the side, he never seems to feel any enjoyment. And though he is disillusioned with his current job, whenever he tries to write anything else, he just draws a blank.

If this wasn’t bad enough, the new, liberated society seems to have its negative aspects. This is the film that gave birth to the word Paparazzi, who we see in multitudes, swarming around the famous and those who don’t yet know that they’re famous – like the woman whose husband has recently killed himself and their kids, but her first inkling of this is when she is surrounded by thoughtless photographers.

La Dolce Vita looks great. But is it Any Good? Well, of course, but like Marcello (played enigmatically by Marcello Mastroianni), it is very pretty but vacuous. If you dig beyond the surface, it doesn’t have much to say for itself. Marcello is a cypher, who has regrets about his relationships, his job, his best friend and his relationship with his father, but doesn’t do much about any of this.

My biggest problem, I think, is dealing with the endless parties. Now I don’t think that this is anything that I’m supposed to aspire to, which is just as well because they are full of vacuous poshoes who talk to each other in a mixture of languages without anyone saying much of interest. And at 3 hours long, this is a lot of boring parties. And yet, the film seems to believe that there is something about these events which is worth documenting.

La Dolce Vita has an intrinsic problem in that it wants to depict the way in which society is declining, but it is difficult to depict what is wrong with modern life without being implicated in the decadence that it is trying to denounce. Apart from a prostitute’s house, whose rooms are inch deep in water, there is little shown which has been directly experienced by People Like Uz.

In the end, though, a combination of great cinematography and understated acting keeps us on board until the end. It helps that the film was denounced by the Catholic church, but I doubt that it would be seen as being quite as subversive today. Having said this, it certainly does not feel remotely anachronistic. It is a film to be respected for its role in cinema history, and still has plenty to say. But I wouldn’t put it on any Greatest Ever list. Very Good but not Great.