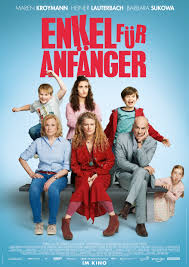 “There are times when you’ve been on the same train together for decades, and then you feel that you’re starting to travel on different tracks”. Karin (Maren Kroymann) isn’t taking to early retirement very easily. She stopped work to spend more time with her husband, expecting that they could do exciting things together – go to New Zealand maybe. He just wants to sit together on the sofa.

Karin’s sister-in-law Philippa (Barbara Sukowa) gives her an idea. Philippa has just started as a Patenoma – a word that’s difficult to translate as the concept is quite new. Literally it means godgrandmother. The idea is that retired women who are still of sound mind and body spend their spare time looking after kids while their parents are doing more interesting things.

Philippa’s new charge Leonie has helicopter parents, but only when it suits them. They are very specific about what she can do, see and eat (bio only, natch), but don’t seem to want to spend any actual time with her. Not when they can put her in the hands of Philippa, even though she’s a bit of an old hippy and lives in some sort of camp for old wooden caravans.

Philippa likes to think that she hasn’t let herself get old, but the truth is that she never really grew up, which isn’t quite the same thing. She teaches Leonie how to shoplift and feigns Alzheimers when they are caught by security. She gives valuable lessons about how we should not always respect authority. And at a crucial moment she lets Leonie wonder off on her own, as she, Philippa, would rather play with the balloon animals.

Karin not as irresponsible as her sister-in-law, but “her” kids suffer a similar lack of parental attention. Initially she’s only supposed to be looking after Jannik, a troubled boy, who seems to have something like Attention Deficit Order. Jannik’s sister Merle starts off by being too cool for this sort of stuff, but gradually she gets lured into the new extended family.

And then there is Gerhard, an old friend of Karin who she meets on her way to the Patenoma agency. Gerhard is a retired doctor, he’s gay and his partner died a couple of years ago. Since then he has become increasingly curmudgeonly. He has little time for other people, still less for kids. Gerhard is my sort of people, and is played with a charming churlishness by Heiner Lauterbach.

Yet despite his misanthropy, Gerhard also becomes a Patenopa – a godgrandfather – almost by mistake. He is put in charge of Viktor, the son of a Russian single mother, who is the only one of the parents who seems to deserve any support. Viktor is shy and the victim of bullying, Gerhard teaches him how to fight back, albeit not very effectively. He also spends quality time with Viktor’s mother, helping her to weigh up her potential Tinder dates.

And that, more or less, is it. There is some Plot – Karin gets caught up in an unnecessary affair, others make their own mistakes, and everyone learns valuable lessons in the end. There is even some pensioner bouncy castle action. To be honest, it does wind up with a few too many group hugs for my taste. And yet, although there is no real depth to the plot, somehow it all works.

This is partly down to an excellent cast, not least the three main characters. These are no superheroes – each one is deeply flawed in their own way – and yet they are all believable and ultimately sympathetic. Lauterbach is particularly good as the grouchy Gerhard – always quick with a sardonic comment, but never less than loveable.

At a time when too many films contain formulaic stereotypes, casting lead characters who are in their 60s is subversive of itself. And the idea that they might pursue love is almost scandalous. Karin’s, Philippa’s and Gerhard’s lives are no more interesting than their younger contemporaries – in fact they are somewhat dull. But that’s not the point. These are lives which are rarely portrayed onscreen at all and this along brings the film a certain freshness.

And there are some good jokes, pretty much all of which punch up against society’s Bad People. The pensioners are never ridiculed for their follies, and the kids are seen as real people with real, if conflicted, emotions. If anyone is at fault, it is the parents who think they can outsource love and responsibility, but even these aren’t handled with any great savagery (which is somethings a shame as some of them really deserve a good slap).

This is not the film of the year, nor will it change the world. But as long as you set your expectations appropriately, you may be treated to a pleasant surprize.