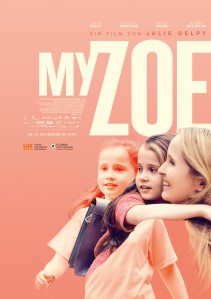 Isabelle is a French-US American genetic scientist who lives in Berlin. She is going through a messy divorce with James, a British architect (did you get all that?). If truth be told, James is a bit of a dick. He’s very inflexible about visiting times for their daughter Zoe, and seems to resent both Isabelle’s job and the fact that she can no longer afford to pay for Zoe’s private school.

Isabelle has a new bloke, but she seems unwilling, or unable, to let him in. She is particularly keen to not have him meet James. This leaves him with little to do, but its a pleasant change when the character who’s only there to hang in the background looking glamorous is a man.

Suddenly, one morning, Zoe doesn’t wake up. She’s rushed to hospital where the doctors give increasingly grave reports of damage to her brain. Isabelle and James have nothing to do but wait, cooped up in a glass waiting room which looks like an interrogation room from a cop tv series. They do what they do best – bitch at each other, and raise recriminations about who’s to blame.

By the time the doctors come round to ask whether they’d like to donate any of Zoe’s vital organs, we’re only about halfway through the film. So, it up sticks from Berlin to Moscow and follows a different plot which is only tenuously related to what’s gone on before. But we do get to meet Daniel Brühl as Thomas, a Russian doctor with a – possibly undeserved – dubious reputation. His waiting room is full of older women nursing their pregnancy bumps (the film is set in the “near future”)

What happens in the second half can’t really be explained without reference to a rather big plot spoiler. So, I’ll mention it once in the next sentence – and we need never talk about it ever again. So here’s what’s happens: Isabelle asks Thomas if he can clone some DNA that she took out of her daughter’s dying body.

If you skipped the last sentence, all we need say is that Isabelle presents herself – and Thomas – with a massive ethical dilemma. In a sense its all very Black Mirror, except that I don’t think it sufficiently deals with the moral problem.

Thomas starts by saying it would be unethical, then he says he’d lose his job and suddenly in the next scene he’s preparing to do what he’d previously sworn would be impossible without any real sense of why he’d change his mind. Later in the film, Thomas’s wife will make an even less explicable decision that goes against everything else she’s argued so far.

Similarly, although Isabelle is much more unwavering in her attempt to see things through, there are some real questions about her actions which she doesn’t attempt to confront. Now that’s ok on the grounds of realism – she is a slightly unhinged grieving mother, who doesn’t want to deal with harsh truths – but it does mean that there’s little dramatic tension.

In short, after a grim and compelling first half, the second half starts by seeming like it will pose some Important Questions (Isabelle asks why there is no word equivalent to “widow” or “widower” for someone who loses a child. Thomas later comes back to her to say that Hebrew, which developed in a far harsher society actually does). But then it doesn’t really know what to do with the dilemmas that it sets up.

It is all far away from director Julie Delpy’s previous films as director, which often preferred to channel her persona in Richard Linklaker’s “Before…” films. And its great that she shows this level of ambition, even if it doesn’t always work perfectly. Even in the less successful second half, the fact that you’re watching actors with the calibre of Delpy and Brühl means that its never going to be boring.

A final shout out to Berit Kuennecke, defying the typecasting that gave her the role of Nurse 3. Where has this actress been all our lives? And what will she be in next?