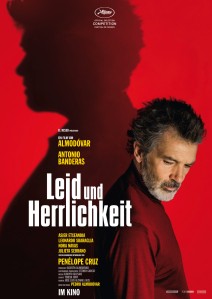 The opening credits breathlessly announce that this is un film d’Almodovar, giving us a reasonable idea what to expect. It’s a “film about film” starring Antonio Banderas as Salvador, a film maker who used to be good and Penelope Cruz as his mum (in flashback, natch)

Salvador’s body is riddled with disease and he hasn’t produced much of any worth in ages, when a film company reissues one of his early films and asks him to introduce it. This provokes the first reunion of the film where he comes back in contact with Alberto, the film’s leading actor with whom he had a major row over 30 years before.

Salvador writes a stage play based on an earlier part of his life, and encourages Alberto not just to star but also to claim ownership in case anyone might think that the gay author was Salvador. This leads to the second reunion with an old lover who is featured in the play and walks off the street to see a performance.

Meanwhile Alberto has supplied Salvador with heroin to deal with his pains, both physical and existential. Under influence of the heroin, he remembers scenes of his life with his mother, both their early life in a converted cave and towards the end of her life. He also remembers seeing a builder strip and wash himself in their house, an experience that had a lasting effect.

I’m not fully convinced that the episodic nature of the plot and the constant switching between time zones really work. We see a series of scenes from a life that don’t fully hang together and could have been easily replaced by other scenes.

It’s interesting enough, but it lacks a certain coherence. With his main character as a fading lonely film director, is Pedro trying to tell us something? Well probably not, so what is the point of it all?

Having said that, the acting is great and the film looks marvellous. Particularly in the theatre and in Salvador’s home, there is a vivid use of primary colours in the background which gives it all a hyperreal quality. Many of the outside scenes are similarly outstanding.

In the end, it leaves you with a feeling that I’ve had before with Almodovar films – a slight disappointment that it wasn’t quite as good as it should be, but still good enough to have you going to see the next one.