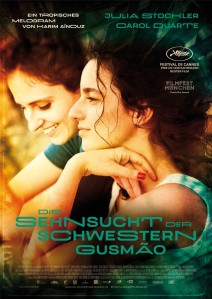 Rio de Janeiro, 1950. Guida is asking her sister Euridice to cover for her while she goes dancing with a Greek sailor. Euridice prevaricates – she seems more in awe of their conservative parents than her footloose sister – but you know she’ll come good in the end. Its not long before a letter is left on the doorstep saying that Guida has left with the sailor to Greece, and will return when she’s married.

Euridice is married off to a friend of the family – an older man, who shares her father’s patriarchal values. On their wedding night, she is taken ill while consummating the marriage, so he puts her under the shower before finishing off. Yes reader, he raped her. You get the feeling that his values may come into conflict with her desire to become a concert pianist. Not least because whenever she tries to play the piano, he comes from behind and gropes her.

Guida returns from Greece, without a husband but visibly pregnant. Her father is affronted, and throws her out of the house while her mother looks on passively. When she asks what’s happened to her sister, he tells her that she went off to train as a concert pianist after all, and she’s currently studying at a music academy in Vienna.

Euridice becomes pregnant, and the baby is due in the same month as her big piano test. She decides to have an abortion, despite a friend telling her it’s a sin and it’s illegal (in that order). Then her husband comes home, having just met her doctor by chance. The doctor had told him that congratulations are in order. It looks like that abortion won’t be able to happen.

So we have the set up. Two sisters, living in the same city, but each believing the other to be in Europe living out their dreams. In voiceover, we hear letters from Guida sent to Euridice via her mother and are led to believe that these have not been passed on, possibly following intervention from their father. We later learn in passing that the truth is even harsher.

Euridice hires a private detective to try to track down her sister. He draws a blank until a few years later when he comes across a very minor plot spoiler. If you are irritated by this sort of thing, please move to the next paragraph now. Guida has been living with Filomena, a former prostitute who befriended her. But as Filomena gets more ill, the sexist property laws mean that she can’t leave her house to Guida. So Guida becomes Filomena, and the detective finds Guida’s grave, containing the deceased Filomena.

Meanwhile, Guida is saving up her money to travel to Vienna and track down Euridice. She books a meeting with a lawyer to find out what she needs to do. She needs to get visas for every country to pass through – for herself and her son. But they can’t issue visas to the son without written permission from his father. The fact that she has no more contact with the father is irrelevant.

Tonight’s showing was attended by director Karim Aïnouz, who did his best to deal with the bland questions that were put to him, making it clear that this was not just a film about how terrible life was for women in 1950s Brazil. Although the film won the Un Certain Regard award at Cannes and was Brazil’s entry for the best “foreign” film Oscar, president Bolsonaro’s culture ministry did everything they could to prevent public screenings.

Die Sehnsucht der Schwestern Gusmão tells a vital part of Brazilian history while having a deep contemporary relevance. And have you noticed how few films nowadays are based on proper novels? This is a tale well told about the real lives of real people which is a warning for the future as well as the past. And yes, it is overlong, but grant a little indulgence to an important cultural intervention.