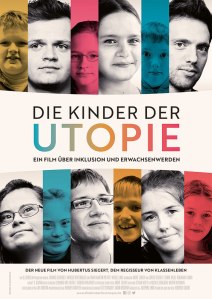 This is a follow up documentary to something i hadn’t seen, but we do see extracts as the kids featured in the original documentary meet up again a decade later and watch bits together.

The original film was about a school experiment of putting kids with disabilities – physical and mental – together in the same class as able bodied kids and seeing how it affects their development. Very well indeed it seems.

It appears that its not just the disabled kids who benefit from them not being excluded from what is deemed to be “normal” society. The other kids note that some of the prejudice experienced in less mixed schools (taunting a kid with only 2 fingers on her hand by asking her for a high five) would have been unthinkable in their group.

The film’s set up is to take 6 kids, the first 2 meet up, then the 2nd meets the third and so on, so you’re largely seeing two people at a time which brings out their individual personalities. One is more confident, one shyer, one more prone to occasional weeping. At the same time, it seems that they have engendered genuinely loving relationships where you know that if you do cry you will be comforted rather than ridiculed..

How much this is down to the educational methods and how much to the people interviewed (or indeed to slick editing) is not fully clear, but you do feel like you’ve spent time with some very pleasant individuals, notwithstanding the odd nervous tick or ideosyncracy.

One thing though is noticeable (but not mentioned). The able bodied people are generally in further education, while the disabled ones are in menial low paid jobs. This sort of schooling might produce better individuals, but it can’t stop society’s (more precisely big business’s) prejudices once the kids leave school