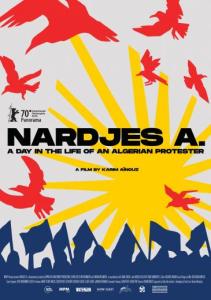 Algeria 1962. Scenes of mass jubilation. The Algerian people under the leadership of the National Liberation Front (FLN) have thrown off the yoke of French colonialism and gained independence.

Cut to February 2019. Although things have got better, the shine of liberation is starting to fade. President Abdelaziz Bouteflika has announced that he is to stand for a fifth term, and people have swarmed onto the streets against his presidency and state corruption. The Revolution of Smiles has just begun.

Nardjes A. follows one young woman, Nardjes, for one day of the protests – 8 March, International Women’s Day. Nardjes wears dangly earrings, lipstick and a Phil Oakey haircut. Her fingernails are painted bright red, apart from one black nail on each hand. Like many protesters, she has an Algerian flag tied to her back.

The film is a snapshot of the revolution which forced Bouteflika to stand down. It is joyous and colourful – overhead shots show the predominantly red headgear in among all the Green-White-Red flags. It is also utterly chaotic – Nardjes keeps finding and losing friends, frantically ringing them to make sure they’re ok.

Mobile phones also predominate taking pictures. Groups of demonstrators take selfies holding flags and banners in front of a row of blue riot cops. People photograph each other’s home made banners. People of different ages and sexes intermingle joyfully, and it all looks so much fun.

Later, Nardjes catches a lift. In the car she sings along with contemporary songs which refer back to the FLN when it was still a revolutionary organisation. She meets up with friends who discuss how the day went, and whether organ donorship is Haram. They eat, they laugh, and then they go dancing.

Nardjes A. does not discuss strategy or how the protests might win. Nor should it have to – there can be other films and pamphlets for that. Rather, it shows the young protesters as they are, not as you might like them to be.

So, Nardjes is shocked when she hears that one of her friends was at the protests in front of the Presidential Palace. Wasn’t that dangerous? Is that what we really want to do? You get a real sense that Nardjes is very clear about what needs to be changed in Algerian society, but doesn’t give much thought as to how this change can be effected. In this sense, the film honestly shows the confused mood at the start of the protests, rather than suggesting that most protesters already had a fully formed strategy in their head.

Throughout the film there is the sense that everyone is in imminent danger – as well as her friends Nardjes regularly phones her mother. If her mother had her way, Nardjes would stay at home – her family have taken part in previous social upheavals in Algeria, and she feels very protective for her daughter. At the same time she seems proud of her reluctantly active daughter, who is representing her on the streets.

One of the first thing I did after watching the film was to try and contact my old friend Omnia. I first met Omnia at a political conference in Cairo. She wasn’t attending, but was with a group of local journalism students. We kept contact after I returned to Berlin, but whenever we started to talk about Egyptian politics, Omnia became guarded, wary that state forces were listening in.

Then Hosni Mubarak was overthrown, and I returned once more to Egypt. Omnia was central to setting up meetings in her home town of Tanta – with everyone from the Muslim Brotherhood to social democrats to trade unionists in the nearby Mahalla textile factory to friends of hers who did voluntary work for Islamic charities. Omnia did not lead the Arab Spring, but it would not have been possible without people like her.

One day, out of the blue, Omnia sent me a message: “I’ve lived under a dictatorship all my life. It just isn’t fair”. This is something she would never have written before Mubarak’s fall. Read in isolation, it doesn’t seem particularly radical, but it was the simple sense of injustice that caused Omnia and many people like her to actually change the world.

As with Omnia, so with Nardjes. Throughout the film, she explains her everyday existence in voiceover. Nardjes is not a natural radical – she would rather go dancing – but she feels compelled to protest because things cannot carry on in the same way.

Originally, director Karim Ainouz just wanted to make a general documentary about the country in which his father was born. Then he got caught up in the middle of a peaceful revolution and met people like Nardjes. This happenstance is something that we can only celebrate.

The end credits explain that although Bouteflika is gone, many of the old power structures are still there and the fight goes on. For all her desire to just live a normal life, you can bet that Nardjes and many people like her are going to be pulled into further struggles. Let’s hope that Ainouz sticks around to film the further developments.