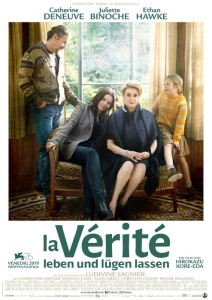 Paris, the leafy suburbs at the edge of town. The palatial home of the ageing actress Fabienne (Catherine Deneuve). Fabienne is listening impatiently as a journalist asks her facile questions. But she’s got to sit through the interview. She’s got a book out. A memoire called – wouldn’t you know it – The Truth.

Enter Fabienne’s daughter Lumir (Juliette Binoche) with her US American husband Hank (Ethan Hawke) and daughter Charlotte in tow. They’re on a rare visit from the States where Lumir is a successful screenwriter and Hank is a less successful tv actor and recovering alcoholic. Hank doesn’t speak much French and his main role in the film is to stand in the background playing with the kids while mother and daughter bicker.

As soon as she can, Lumir gets a copy of the memoire and starts underlining vigourously. It may be called The Truth, but in fact its anything but. Its full of untrue stories of Fabienne spending long hours playing with her doting daughter, and all sorts of major characters have been exorcised, not least her old acting rival Sarah.

Fabienne had both a close and a frictional relationship with Sarah, which is coming back to her in her latest role – a science fiction piece of tat about a woman who finds immortality by leaving in a rocket. Fabienne is playing an elder version of the woman’s daughter. The younger version is played by an unnamed actress (Ludivine Sagnier) who looks and sounds exactly like the young Sarah.

This is not the sort of film where much happens. Fabienne falls out with all and sundry. She imperiously walks her dog in leopard print down leafy streets. She leaves rehearsals in a huff and jumps into a taxi. Because its Catherine Deneuve, there’s something rather marvellous about it all, but you do get to thinking, is anything going to actually happen? It isn’t.

I think that how you react to the film could depend on how you relate to one scene between Lumir and her daughter. As its towards the end of the film, it could potentially be seen as a plot spoiler, so if you’re precious about things like this, please ignore the following paragraph. But as I’ve tried to explain, there really isn’t much of a plot to spoil.

It follows a scene where Charlotte has told her grandmother how she’d like Fabienne to escape in a rocket so that she could watch Charlotte become a successful actress. For a moment, Fabienne breaks out of her usual diva pout and into a smile. In the following scene, we learn that Charlotte was just saying words that Lumir had told her to say. “But is it true?” asks the young girl. Lumir just responds with a knowing smile.

Ok, did you read that and think “wow, what a profound moment which caught the inner truth of familial relationships”? If so, I think you’ll be fine with this film. There’s a lot of this sort of stuff. If, on the other hand, the cutesy sentimentality had you rushing for the sick bag, well you can join me at the popcorn counter.

La Vérité is the first European film by Hirokazu Koreeda, whose previous film Shoplifters was beloved by critics and pretty much anyone else who saw it apart from me. Now while I would say that both films share a certain meaninglessness that have you internally shouting “What’s the point?”, I think that they are disappointing in different ways.

Besides that, La Vérité has a stellar cast. Its great just to watch Catherine Deneuve flouncing around disdainfully in a world that never quite matches up to her regal expectations. If you get a little bored (and you may), you can play a little game of trying to work out how much Deneuve is acting, and how much she is just being herself.

Binoche’s performance is more restrained, which makes her a useful foil. Lumir is damaged by her upbringing and feels unloved by her mother’s apparent lack of attention, but she does come over as being a little self-indulgent herself. This is not a film which is in love with its characters – perhaps better said, it loves its characters while being well aware of their flaws.

In the end, the best that I can say that if you like this sort of film, this is a film you’ll like. If you’re ok with meandering plot and a faux meaningfulness which seems devoid of content, then its just your thing. Because the parts where it is unquestionably good – some of France’s best female actors showing that they’ve still got what it takes – are phenomenally impressive. And I haven’t even said anything about Ludivine Sagnier yet.