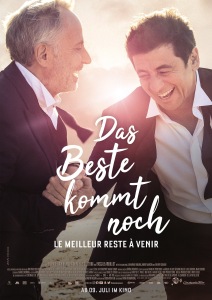 Arthur and César have known each other since school. Arthur is precise and restrained, with a smart, trimmed beard. César is more of a shlubby womaniser. In the prequel they’d have been played by Jack Lemmon and Walter Matthau. For reasons of Plot, César falls out of a second-floor window, then is treated in hospital using Arthur’s health insurance card.

The next day, the hospital contact Arthur with terrible news. He has contracted lung cancer and has 6 months to live at best. While Arthur knows that the x-rays that they’re looking at are of César, he feels unwilling to break the bad news to his old friend. Plot again intervenes to make César think that Arthur himself has been condemned to an early death.

The pair go on a road trip, each believing that he is accompanying his mate on a bucket list journey. They visit old haunts, go gambling in Biarritz and at one stage visit the doctor in India who put Lance Armstrong’s cancer into remission. Arthur urges César to make his peace with his rich father, while being in turn pushed to finally deal with the ex-wife whose ring he continues to wear.

We see the pair playing table tennis on an old drawing room table, buying a dog for no apparent reason, and generally behaving like a pair of teenagers. And all the time we know that the longer this goes on, the harder reality will intervene when César eventually learns that not only is he going to die, but his old friend has been keeping this information from him.

As Arthur and César, Fabrice Luchini and Patrick Bruel make a good double act, and are assured in each other’s company. And some of the gags are laugh out loud funny. The film is most definitely at its best when keeping its distance and watching them row and make up like an old married couple. At one stage they offend the over-sensitive staff of a “family restaurant” by pretending to be gay.

And yet, the whole premise just stretches credibility. We can understand Arthur’s reluctance to break bad news to his friend. But he is offered so many opportunities, which are broken by an implausible rush of words or quickly changed subject that we, the audience, are just too aware of the unlikelihood of what is happening.

And it is this unlikelihood that makes us aware that we are watching a fiction. So we are supposed to be moved by César’s imminent death, but it is difficult to feel any sympathy because this is so obviously a made-up story. A fictional character will stop existing – but because they are the figment of the author’s imagination, they never really existed in the first place, so its hardly tragic.

On top of this, Arthur and César do not inhabit the same world as People Like Uz. Arthur is a doctor and lecturer. If a crisis comes, he can just leave the classroom halfway through, even though its full of students. César is – well the film may have told us, but I’m really not sure what César does for a living. For all his moaning that he’s made a mess of his life, he seems to be doing ok.

The treatment of César’s slow reconciliation with his father equally failed to draw me in. We only have César’s word for it, but it seems that his father was never there when he needed him. César is reluctant to return, and has to be pushed by Arthur, but a silent reunion is both inevitable and risible. César and his father immediately come together because of something – family? – but we neither learn why they fought nor see a convincing reason for them to come back together.

I would not like to finish on such a bleak assessment. Both Luchini and Bruel can be warm and witty, and it is a pleasure to spend some time in their company. As a screwball farce, the film would have worked very well. So its such a shame that the director and writers tried to inject unnecessary melodrama and sentimentality that makes us love it just that bit less.