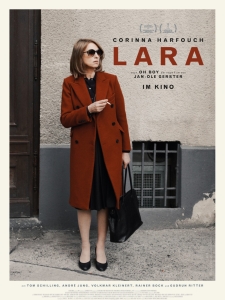 Early morning in a drab black of houses. A woman of indeterminate age – what we used to call “middle aged”, or even “old” – is looking purposefully at her window. She opens it, brings a chair close by and stands on the chair. Will she jump? Not before she hears a knock on the door.

Its the police. They’d like her to witness the search of a neighbour’s house. She tries to fob them off, saying that she’s got stuff to do, but they’re not taking “no” for an answer. She goes with them next door and the moment is lost.

So is the opening of “Lara”. We soon learn that Lara is actually 60 – and that today is her birthday. Her son is an up-and-coming pianist who’s going to present his first composition later that day. At the concert he will say that it is Lara who made him what he is today. We’re not altogether clear whether this is a compliment.

Lara had been a bit of a piano prodigy herself, but gave up for fear of embarrassing her parents. Instead she dedicated great time and effort towards pushing her son’s artistic development. This could be why he’s now not returning her calls, and relatives are advising her not to meet him before the important concert.

All the film takes place on just one day, and most of it follows Lara around town, often behaving quite peculiarly. She buys up all the remaining tickets for the concert, which she would give to friends if she had any. Instead they go to the friendly neighbour, whose house search she’s just witnessed, and to ex work-colleagues. She attempts, without much success, to get them to address her as “du”. In the end, she gives out the remaining tickets outside the concert, but only to people who she approves of.

You don’t get the feeling that Lara was the most popular person at work, or indeed at home seeing as she’s divorced and her son left home to live with his gran. When she meets up with her son’s girlfriend – a violinist – she behaves so vindictively that you start to see why.

As all this is happening, you, by which I mean I, increasingly think, how are you expected to react to this woman? With sympathy? Pity? Disgust? Above all, why are we supposed to care? Why should we worry about the fate of a made-up character for whom we have no real strong feelings. I mean if I want to experience loneliness, malevolence and frustrated talent, I can do that at home without having to go out to the pictures.

I guess the film sees itself as a character study, but I never really bought into the character. Its not that Lara is unbelievable, more that she’s not really interesting. Sure, she’s not a very nice character, but she’s not evil in a way that attracts any real excitement. At the same time, you feel little intrigue about why she’d want to kill herself. In the end she’s just a made-up figure on the screen, for whom I found it hard to generate much strong emotion either way.

This is the “difficult second film” by Jan Ole Gerster who directed “Oh Boy” which sold hugely in Germany and is still wheeled out every summer for the open air cinema festivals, seven years after it was released. I somehow regularly manage to miss the showings, so I can’t compare, but by all accounts this is a lot darker.

Some critics have been kinder than me, and I can sort of see why. Lara is a complex character, and in principle much more interesting that the characterless goody two-shoeses that we often see in film. So, great that we get a title character who is largely unsympathetic. But I couldn’t raise enough strong feelings to really care about her or what happens to her.