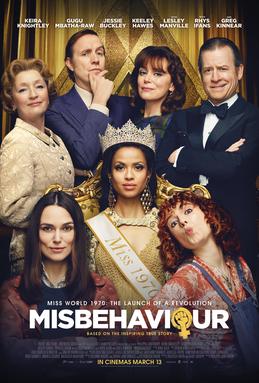 1970, Vietnam. Bob Hope is entertaining the troops. As a special treat he brings on Miss World, an Austrian woman who’s name he can only pronounce via cue cards. Meanwhile, Sally is trying to get on a history course at UCL. She sounds astoundingly posh, but she got there the hard way, having left school at 15 because they were only interested in teaching women to be wives, then later doing a diploma at the trade union college Ruskin.

Sally has already married, and divorced. She has a daughter and a new partner, who is supportive but wet. She constantly clashes with her mother, who is literally from a different generation. This all means that she gets excited when she bumps into some women from a feminist squat in Islington, who must be common because some of them have Northern accents and dress down.

Hope accepts an invitation to compère the 1970 Miss World contest, to be held in London. This may feel like something from a bygone age, but the 1969 contest attracted a higher tv viewing audience than both the moon landings and the World Cup final. The wimmin decide to stage a protest, buying tickets to get themselves through the extensive security set up after an Angry Brigade bomb on the eve of the event.

As we see the preparations to disrupt the competition, we are also introduced to some of the contestants. There’s Miss Sweden (beauty queens are never allowed to use their real names), who’s a bit Bolshie, and objects to not being able to go anywhere without a chaperone, Miss UK who’s a bit thick, and Miss Grenada, an airline hostess who would prefer to be working in broadcasting.

And then there’s Miss Africa South – a black woman who is not to be confused with Miss South Africa, the winner of the national competition. Miss Africa South was added at the last minute when the Anti Apartheid Movement, fresh from their successful cricket protests, had threatened that they would call for sponsors to boycott the event.

Where the film is most successful is when it raises the complex contradictory demands from campaigns against racism and sexism. This was the first Miss World contest where black contestants came close to winning. These were mainly working class women, who needed the prize money to escape their own poverty. And yet they also had a keen understanding of the effects of racism and colonialism.

There is a key moment towards the end where Miss Grenada and Sally meet in what is quaintly called the Women’s Powder Room. Miss Grenada explains, patiently but clearly, that the level of oppression that she experiences as a black woman from the Global South is something that the posh voiced student couldn’t begin to comprehend.

This could have been a cutting critique of White Saviour Complex, but somehow it falls flat. This is partly because of the implausibility of the meeting, but I think it’s also because the film tries too hard to understand every point of view. Sure, we see the whole crassness of the contest – including the part where the finalists turn round for a minute to allow people to leer at their arses – but there’s a little bit too much special pleading going on which stems our outrage.

We could have done with a little more of Miss Sweden, the only contestant who seems really capable of breaking ranks. Remember this is a competition which did not just ban married women – it banned anyone who wasn’t a virgin. And yet Miss Sweden’s disgust at the whole thing is ultimately dismissed as being enabled by the privilege of a white Western woman.

Given the context, maybe “workmanlike” would be an unfortunate adjective. But Misbehaviour gets the job done without any ostentation. The acting is functional without being astounding (surely, I’m not the only person who thinks that Keira Knightley’s career peaked at Bend it Like Beckham). And it does tells an important story that needs telling.

This could have been a much better film. But that would have needed acting and a plot which were of a much higher order. We are presented with a disgraceful event which was prime time viewing in the living memory of many people, and it comes across as a Sunday afternoon tv programme. Great that the film was made, but it could have been made a whole lot better.