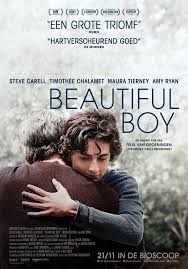 Or rich people can be sad too

What to think of this one? Its very well acted, particularly by Steve Carrell as the freelance journalist struggling to understand why his son’s an addict

But it is tertibly safe, and you feel a value judgement that thinks that because this kid goes on surfing holidays, has a letter from Keith Haring and parents who can even consider a $4000 per month rehab clinic, his addiction is somehow more tragic than, say, a Renton or Sick Boy

Speaking of whom. Trapinspotting was revolutionary not just because it was about normal people but because it showed people actually enjoying taking drugs. Here you thought that the drugs were largely to fit his pseudy Charles Bukowski quoting persona

Great soundtrack mind – Protection, Sound and Vision and Song to the Siren (the Tim Buckley version) in the first half hour