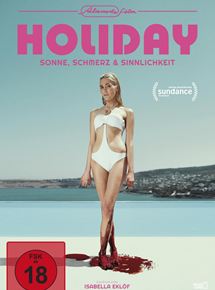 I’m not really sure that the film lives up to this opening promise.

Sascha is a Danish bottle blonde who has just landed on the Turkish coast to join her “boyfriend” Michael – given the disparity in their power relations I think she’s nearer to the mark later in the film when she calls him her boss. Before she meets him, she gets bashed around by one of his minions, giving a general idea of where we’re going with this.

They’re staying in a luxury villa with various other gangsters and their equally blonde Plus Ones. Michael doles out random violence, drugs Sascha before pawing at her body, and subjects her to dubious karaoke music. Most shockingly, in a protracted scene he slowly and systematically rapes her.

There is no joy or leering in this depiction of violence – unlike the films of a certain other director who has a film out next week. But this film hasn’t been made by a geeky frat boy – its director and writers are women, who manage to show the violence as horrific if somehow inevitable. It is also great that the film is shown almost entirely from the POV of the victim, not the perpetrator of sexual violence

Moreover there is always the ominous sense of further violence to come, or – as the women and a small girl watch cartoons with the sound turned up to muffle the sound of someone being beaten up in the next room – being doled out elsewhere off screen.

When Sascha starts flirting and sharing MDMA with a Dutch hippie who gave up his job in Sales to buy a boat and sail the world, you know that this isn’t going to end up good, but this nasty ending is shocking and surprizing and points to the complicity of all concerned.

And here, while trying to avoid plot spoilers, is the main problem thar I had. With one significant exception, Sascha is seen as being entirely without agency. She accepts the beatings and worse because an ageing drug dealer buys her expensive earrings and takes her to lavish parties. Yet she never seems to take any joy out of the presents, and slips out of the parties as quickly as she can.

A film that refuses to offer us bland palliatives and makes us feel uncomfortable is most definitely a Good Thing. But there’s got to be more to it than that. Yes, it is uncomfortable watching this nice but featureless young woman being raped in slow motion, but what am I supposed to do with this information? Its not like it took the film to convince me that rape is generally speaking not a good thing, And watching the scene is most certainly not fun.

If the film is offering any opinion of its characters and of the world in general, the message is bleak and very pessimistic. Now I’m as bleak and pessimistic as the next person, but even I need a redemption somewhere. But you get the feeling that the beatings will continue, and there’s nothing that any of us can do to stop it.

“Holiday” only lasts 90 minutes, but somehow seems much longer. Several scenes seem unconnected to the plot – as if there’s a longer version somewhere which refer back to them, but these references have been cut, leaving the scenes hanging in air. It is, in short, a depressing and disjointed film. But it is not without its merits.

Take, for example, the final scene. Sinnerman is playing again, this time sung by the Swedish artist Jerry Williams. Sascha is sitting on the prow of a sailing boat, like a low-budget Kate Winslett in Titanic. She looks back at the camera and winks. She has learned nothing. But she is still there. She retains the illusion of control.

At this point more than any other you realise why she does what she does. And it makes you very sad indeed.