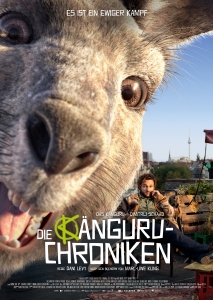 Berlin-Kreuzberg. A typical flat. The doorbell rings shrilly. A dishevelled man answers and sees a kangaroo at the door. “I’ve just moved in next door and am renting, well not exactly. I’m making pancakes. Do you have any eggs?” The dishevelled man finds some eggs in the fridge. This procedure is repeated several times, with the kangaroo demanding milk, flour, a bowl and eventually comes to take over the kitchen.

Suddenly, the doorbell rings again. Its the police, looking for squatting kangaroos. This being Kreuzberg, the man – Mark-Uwe – says he’s seen nothing. The kangaroo moves in, saying “I’m a communist, you’re an anarchist. Things will go just fine. Until the revolution, then they’ll get interesting”.

Roll opening credits and a caption “One Year Later”

Mark-Uwe Kling’s kangaroo books are massive over here. They are good natured, funny, and politically radical. This is an attempt to bring the anarchic playfulness of the books on screen, with Dimitrij Schaad playing Mark-Uwe (no relation).

The story, such as it is, goes like this. Marc-Uwe and the kangaroo come into conflict with Jörg Dwigs, property speculator and bigwig in the right wing populist party Alternative zu Demokratie (AzD – alternative to democracy. Any similarities to existing political parties is, of course, accidental). Dwigs’s wife keeps touching her pregnant belly and wears the distinctive haircut favoured by AfD’s female politicians.

Dwigs wants to build a large building – to be called the Europa Tower – on most of Görlitzer Park in Kreuzberg. This will require destroying the homes of Marc-Uwe and his neighbours – the Turkish brothers Friedrich Wilhelm and Otto von, whose parents tried a little too hard to integrate, and the beautiful Maria. Marc-Uwe keeps meaning to ask Maria out, but is always tongue tied when he tries to say anything.

Dwigs is aided by a group of local baseball bat carrying Nazis who are not played for intellectual or emotional depth. The rest of the story isn’t too important. The good guys get to take on the bad guys with the help of a soundtrack that contains some David Hasselhoff and a cameo by cult singer Helge Schneider. It is in the moments of sheer silliness that the film is at its best.

Dwigs has regular video calls with his international contacts, who include lookalikes of Nigel Farage, Geerd Wilders and who knows who else. The film always likes to have plenty going on in the background, which you may or may not notice, and you lose nothing if you don’t. There are references to Pulp Fiction, Groundhog Day and Fight Club which don’t serve much more dramatic purpose than just being there. Label that hommage or self-indulgence as you see fit.

Tonight was the world premiere, and there was a section of people in the middle of the cinema who guffawed from beginning to end. I certainly wouldn’t go that far, but there were enough good gags in there to keep us entertained throughout. Also, there is such a pervading feeling of playfulness that you would have to be very stern and humourless to not wish it well.

Added to this, it is always on the side of the good guys. We cover all the right bases – gentrification, Nazis, right wing populism, and the film is very located in a Kreuzberg that probably rarely exists any more, with its corner pubs, local shops and community who know each other and help each other out.

Like its main character, Die Känguru-Chroniken is shambling and has no real direction. In principle, Mark-Uwe would like to get the girl, but he never really wants to leave his “artist’s” lifestyle of not getting up till early afternoon, then spending the rest of the day lying around in his pyjamas. His lack of ambition is admirable, especially when compared to the greedy and manipulative Dwigs, but some of his listlessness sometimes rubs off on the film.

So, although there are some very good jokes, others aren’t of the same quality. Some of the characters are stereotypical and drawn with very broad brush strokes, not least the brainless Nazis who constantly repeat each other. At times the film uses very clever wordplay, at other times it just stumbles along, so you feel that its doing itself an injustice.

File under: honourable failure which contains some very good scenes which work better as standalone pieces than as part of a coherent plot. It is definitely worth seeing because some of the parts are great. They just never properly cohere to make up a satisfying whole. Good, but leaves you feeling that it could have been better.