Sing it Loud follows a competition for evangelical choirs in Tanzania. Even though the film does not get beyond the surface of the event, it still offers keen insights finds Phil Butland. 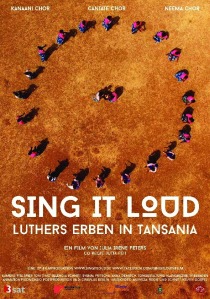 In Luther year (the 500th anniversary of Martin Luther’s 95 Theses) we can expect to hear a largely white European history. Julia Irene Peters – who grew up in the East German church – wants to tell us a quite different story. Every year over 1500 choirs in Tanzania take part in a competition. They must each sing two songs – one of their own choice and Luther’s hymn “Ein feste Burg” (A mighty fortress is our God).

Peters follows members of 2 choirs – the Neema choir, in which mainly poor farmers sing, the Kanaani youth choir and the relatively middle-class Cantate choir. Without extra commentary we get to know the different perspectives of the people involved.

Evarast from the Cantate choir, who owns a garage, explains his understanding of social responsibility: “the person who works here is dependent on me. I am responsible for him. He cleans, opens the gate, feeds the chickens and does the garden. We are dependent on each other.”

Simon and Martha from the Neema choir explains how – in addition to their own five children – they had to adopt Simon’s nephew. Simon’s sister “acquired the child outside marriage”. The peasant family has also taken in the son of Martha’s uncle, as his father is too poor to look after him.

All the interviewees are unbelievably sympathetic and what they all have in common is the joy which singing brings them. Nonetheless their Christian charity cannot always be separated from an old-fashioned Puritanism. Members of the youth choir discuss regretfully how ex-member Robert has taken the wrong path: “he was drunk … he then went back to the disco”. Similarly, Evarast believes that many families are poor because they have ignored the missionaries and drunk too much.

A society in change

Between the interviews we see professional videos of choreographed songs with traditional African rhythms, whose texts praise God, occasionally subverting our expectations of the lyrics of such songs. The choirs are filmed in front of picturesque landscapes, and the whole film could easily used as an advertisement from the Tanzanian tourist board.

However, some of the most interesting stories are those that aren’t told. At the moment, Tanzania is experiencing a cultural change. The competition is in the best sense a microcosm of this development. Singers in traditional clothing are filmed with Smartphones while they sing Luther hymns. Much has changed since the first competition, which took place in 1954, when Tanzania was still under British rule.

Hazron Mashauti, director for church music explains how religion existed in Africa before the German missionaries came and how the Massai are bringing their culture and traditions into their interpretation of Christianity.

The youths of the Kananni choir produce hip-hop music and discuss whether it is devout to take part in a competition. The result of their discussion? Its a battle, and they must win.

At the very beginning of the film we are reminded of the German colonial troops who killed 200 Africans in a revenge attack. This story is told in front of the murdered missionaries, who are still presented as being the holders of civilised values”.

Stories that you can’t hear anywhere else

It is perhaps not fair to expect that a film concentrates on subjects that do not necessarily interest the director. So when I say that I’d rather have seen more of the tension between the piety of the Africans and the murky history of colonialism, this is no serious criticism of of “Sing it Loud”. If that’s what I want to see, I should go out and make my own film.

“Sing it Loud” is a film that shows more than it explains. And that’s a good thing. What is shown are societal developments that you rarely see on German film screens. And that makes the film worth seeing.

Some members of the Kanaani youth choir are coming to the premiers of the film and for a small film and concert tour of Germany from Tanzania. If you’re interested, you should definitely go along.

And while the film does not deliver a socialist message (and why should it?) what it does show is a society that is woefully under-represented in Western media.