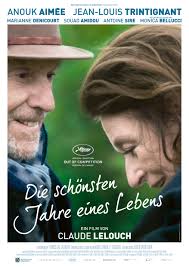 The Communal Room in an old person’s home. Someone’s been brought in to help test their memories. She asks them to date incidents of the past 60 years – de Gaulle and Mitterrand winning the presidency, Princess Di’s death, the abolition of capital punishment. Some of the questions are difficult and only a few people call out answers. Some of them are answered by everyone. Well, nearly everyone.

At the back, a man in a wheelchair looks profoundly uninterested in what is going on around him. Its not entirely clear whether that this is because he’s losing control of reality, or just that he’s bored with the whole procedure. Either way, he looks like he’d much rather than be somewhere else. Meet Jean-Louis (Jean-Louis Trintignant). Once upon a time he used to race cars.

Jean-Louis’s son Antoine is worried that his father doesn’t seem to remember much any more. The only way of drawing him into conversation is to mention an old flame, Anne. So Martin tracks down Anne (Anouk Aimée) and introduces her to Jean-Louis, with the hope that talking to her will help get his brain cells going again.

At first, Anne has to start each meeting reminding Jean-Louis who she is. But slowly, gradually, he picks together the memories of their brief relationship over 50 years previously. This is played out in sepia film using scenes from A Man and A Woman, the Oscar and Palme D’Or winning film that director Claude Lelouch made with Trintignant and Aimée in the mid-1960s.

Today, Jean-Louis looks like old man Steptoe or Grandad from Only Fools And Horses – grey haired, always slightly unshaven and in a pork pie hat that never quite suits him. And yet when the camera catches him at a certain angle, you see the suave elegance that shines out from the film of his youth. Anne meanwhile has a beauty that society does not expect of someone of her age, and looks every inch the former Script Girl, with whom he is still obsessed.

The film has hidden depths, and covers memory, regret and ageing in a remarkably unsentimental manner. And the memories are not always reliable. Sometimes we have a long scene and then break away when we realise that Jean-Louis has been dreaming. Memories of the past merge effortlessly with his plan – real or imagined – to use Anne to help him break out of his imprisonment. At one stage, he enters a garage with a gun in his hand before suddenly waking up.

Shortly towards the end, Jean-Louis remembers the last time he drove up to Paris to visit Anne. Apparently Lelouch uses scenes from one of his previous shorts for this part of the film. It is 6 in the morning, and he is speeding, running every red light on memory lane. You spend five minutes bracing yourself for the inevitable bloody accident, and yet the point of the scene is not so much the danger as the sense of freedom.

The old relationship between Jean-Louis and Anne didn’t work, mainly because of her husband, who was dead before they met, but whose presence took a lot longer to leave her. It’s not clear whether something new will blossom this time round, but if it does, the best time of their lives is over. And that’s not seen as a problem, but as something to celebrate.

Some critics were frustrated with The Best Years of a Life, but I was delighted. I found it remarkably unsentimental, and unwilling to patronise its older stars. Nor are they held up as superhuman icons who we should venerate, but as flawed people who have lived their lives, made mistakes, and lived with the consequences. We are invited into their experiences by the soundtrack, which is packed with regretful chansons.

There’s a little extra jeopardy in that its unclear to what extent Jean-Louis is faking his dementia to escape his institutionalised life. Yes, he’s slowly losing control, but he’s doing this on his own terms. The audience never quite gets to know exactly what he’s thinking, but why should he let us into his private thoughts? Not all of the film’s critics were able to get on board with such a narrative technique, but it won me over unreservedly.