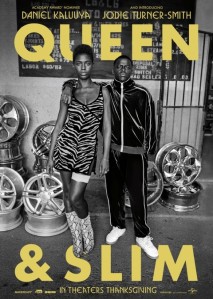 Evening, a seedy green diner that looks like that’s been painted by Edward Hopper. Except that as we pull in we see that the people inside are mainly African-American. The camera draws in on a couple who are on a first (and probably last) Tinder date.

She’s uptight, well dressed, a lawyer. She wouldn’t normally be seen dead in this sort of place. She’s only turned up at all because one of her clients has just been sent to death row and she doesn’t want to spend the evening alone. He’s dressed casually, even sloppily. He eats his food noisily, which she hates. He fondles the crucifix around his neck. He’s happy-go-lucky, and naively believes that this evening will lead to sex and a second date (in that order).

As he drives her home, they’re stopped by a traffic cop who treats them violently and rudely (did I mention that they’re African-American?) The cop is trigger happy, shoots and than is shot, and killed, in self-defence. As she is a human rights lawyer and he is a young black man, they know from experience what this means. Irrespective of who was at fault, if they don’t run now, the system will persecute them and hang them out to dry.

I think I can tell you all this without spoilers as its pretty much all in the trailer, and all happens before the opening credits roll. What follows is a typical odd couple road movie which observes many of the tropes of both film types. Yes, they start off irritating each other but learn mutual respect and even love. Of course the excruciating irritation is ratcheted up by them being cooped up together in a small car. Yet somehow the relationship remains believable and generally rises above cliché.

This is partly because their initial incompatibility is not because they are fundamentally different, but have grown up on different sides of the tracks. On the first, unbearable, date, they just have nothing in common that could provoke a conversation of any depth. But as the film progresses, their mutual desperation provides the shared emotions which pulls them together.

They run first to her uncle who owes her a favour as she got him out of prison (she was defending him against accusations that he killed her mother, but that was ok as she’s not really the family type). He gets them new haircuts and clothes to make them less recognisable. They now look like the pair of fugitive gangsters who you see on the film poster – a “black Bonnie and Clyde”. The irony is that their real lives are much more mundane than this.

From the off, the police take them to be cop-killing outlaws. As a police video goes viral, many young black people, sick of cops indiscriminately killing young black men with impunity, also buy into this myth. Rallies are held to demand their release – although technically speaking, they are still on the run. Wherever they go, there is always someone who tips them a wink to say that “we know who you are, but you’re safe here”.

And yet there is a bounty on their head – $250,000 each – so they know that they can’t really trust anyone else, which brings them even closer together. Generally speaking, black people are more sympathetic to them than white ones. This is perfectly understandable in the Southern States where segregation is still very real, and the white characters we meet may be appalled by racism, but they just lack the experience of institutional racism to be able to feel any empathy.

Yet we still see white characters who show solidarity, and black ones who are only in it for themselves. Whereas cops are generally (and rightly) seen as agents of oppression, we do have a kindly white deputy who just wants to help and a black robocop who may be reluctant to drive protesters from the street but knows who pays his wages.

Nowhere is the conflict between race and duty more stark than in the black cop who is sick of being called “boy” one more time and is prepared to turn the occasional blind eye. Yet he remains a cop. I’ve read a “radical” review which claims that this proves that Queen & Slim is a liberal apologia for racism which is about as bad as the Ku Klux Klan. I prefer to see it as a film that is more interested in depicting the conflicts of real life than in signing on to a revolutionary manifesto.

The fact is though that Queen and Slim (as I guess we must call them, even if these names are never used in the film) are not radical revolutionaries. They are victims of a racist system which institutionally kills young black men, irrespective of whether they have signed on for the revolution. At a crucial point in the film, a fatal standoff between mainly white cops and mainly black demonstrators is intercut with scenes of Queen and Slim doing their best to escape the politics that have come to dominate their lives. As this is a film and not a manifesto, this is perfectly fine.

Queen and Slim is an anti-racist road movie in much the same way that Thelma and Louise was an anti-sexist road movie, and I hope that it receives the same recognition. But it is not just about the politics. The film is also beautifully filmed. Many of the scenes – from the opening diner, through the music club to the petrol station where they hide for a while, have a faint pastel coloured background which is just beautiful. Similarly some of the night scenes of endless lamplit roads are gorgeously filmed.

The film is slightly too long (look, 2 hours is enough, folks), but never drags. You always sort of know where its going (though you’re never certain that it will end like That). Yet the characters are engaging enough for you want to join them on their journey. I literally got the last available ticket to tonight’s showing (thanks to the couple ahead of me in the queue who wanted 2 tickets or nothing). I am very glad that I did.