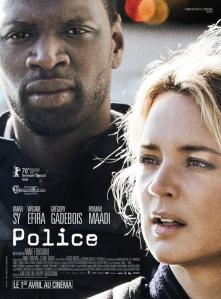 Virginie is having a bad day. She hasn‘t had a decent night‘s sleep in ages because of her 18 month old baby, and things aren‘t going too well with her husband. Not the best time to find out you’re pregnant – why did she forget to take the pill that one time? And certainly not the best time if he’s not the father. Still, she has an abortion planned for tomorrow.

Aristide was having a decent day, mocking Virginie by calling her Miss Norway, because she’s blonde and because he’s a bit of a dick. Then Virginie tells him about the pregnancy. It is, of course, his. He keeps telling himself that Virginie isn’t right for him, but she keeps on reeling him back. Aristide presumably didn’t score too high in the sexual sensitivity test.

Erik’s day is pretty much like every other one. He drinks too much and receives regular abusive messages from his wife. He doesn’t complain and takes the path of least resistance. He accompanies Virginie to house visits where they separate an abusive husband from his wife, and listen to a shocked mother explainaing how she shook her baby too hard because it just wouldn’t keep quiet. Did I mention that they’re all cops?

The beginning of the film repeats the same incidents, Rashomon-style, seen from the POV of Virginie, Aristide and Erik. We hear the same dialogue and see the same people, just from slightly different camera angles. And yet the whole point of Rashomon was that these different perspectives resulted in completely different interpretations of the same event. Here we see the same thing repeated for no obvious reason except that it might be a neat director’s trick (it isn’t). And everyone draws exactly the same dull conclusions.

Virginie’s, Aristide’s and Erik’s troubled domestic lives may be the reason why all of them volunteer for an extra night shift, which ends with them transporting the refugee Tohirov to Charles de Gaulle airport, where he is to be deported. For reasons of Plot, Virginie discovers that if he is deported, he will almost certainly be executed.

As a result, the three try with various levels of enthusiasm to let Tohirov escape. Virginie unbuckles his seatbelt, and hints that he may be interested in opening the car door and running. Aristide alternates between running red lights so he can’t jump out to abandoning Tohirov in the wild to do what he wants. Erik wants to play by the book, but also doesn’t want any extra paperwork so lets the others do what they want.

Have you spotted the problem yet? Well, firstly, the film’s premise is dependent on the idea that, at the time when the French police is gleefully accompanying refugees out of the country – and as quickly as possible – we have chanced upon the one car full of cops who buck this trend. Apparently director Anne Fontaine has said that she hopes that her film will encourage a sense of disobedience, but if she sees prime agency within the notoriously repressive French police, she may well be deluding herself.

Secondly, she has silenced the voice of the real victim of this story. Tohirov speaks no French, and when Erik tries to address him in English, he is equally unreceptive. We assume that he doesn’t try to escape because he thinks that the cops are trying to let him run off so they can shoot him. But we only make this assumption because this is what the cops say amongst themselves. Tohirov is literally voiceless.

Thirdly, this setup removes pretty much all dramatic tensions. Ok, we are unsure how far each cop is prepared to go to enable Tohirov to escape, but this point is entirely moot as soon as we know that he is not going to use this opportunity. Later in the film we are offered a final deux ex machina which defies logic, but temporarily reprieves Tohirov. Even this does not change anything substantially.

This is articulated by the pragmatic Erik who says that even if Virginie and Aristide could somehow prevent Tohirov from being put on the next flight to execution, he’ll be put on the next one. Or the one after that. There is no real jeopardy here, no great change in the scheme of things. If there are any victories to be won here, they are purely symbolic and meaningless.

Police, the film, comes from a good place – the absolute sense of shock that the French government, and many of its equivalents, is quite happy to deport people who were born with the wrong skin colour or religion, even if they know this will end in their deaths. For this, at least, it should be congratulated. Yet its attempt to negotiate the problem is so cack-handed that you wonder what’s the point?

Having refuded to allow the refugee Tohirov any agency, the film looks for a white (or, in Aristide’s case, black) saviour who could change things in a way that just doesn’t seem to fit with what happens in the real world. The cops wrestle with their consciences about what they might do, but this is  a non-existent dilemma whose only purpose is to put them on the side of the angels.

At this stage, I started to remember the earlier scenes of Virginie and Erik helping the victims of domestic abuse and the beaten baby. The more you think of it, the more you see that this is just manipulative trickery to make you think that what they do might be some force for change. But at best, they are utterly unable to make any serious changes to the current helpless situation.

This could have been fine if this were a Ken Loach-like lament on the state of the nation, but as the inappropriate final scene shows, its trying to be a feel-good movie. Before this, Fontaine directed “Coco before Chanel”, and while I do not want to be too mean about a film I have neither seen nor wanted to see, I can only assume that intellectual vigour is not her strong point. It is just a shame that great actors like Omar Sy should be drawn into such superficial nonsense.