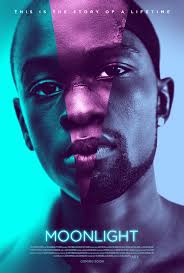 Miami, daytime. A confident looking black man wanders around the local estate, chatting with the local drug dealers. Suddenly, a group of kids rush past – apparently in chase of the skinny one in front. The skinny kid hides in a boarded up building more commonly used by people doing crack. Later, the confident man, who we later learns is a Cuban immigrant called Juan, opens up the house, and – when the kid refuses to speak – invites him home.

We gradually learn that the silent kid’s name is Chiron, but everyone calls him Little. He’s picked on by the bullies at school, and his mother is usually too high to look after him. When she has a gentleman caller, Chiron is told to leave the house and find somewhere else to go. Slowly, Juan and his partner take Chiron under their wing, and Juan takes him to the beach and teaches him to swim.

It becomes obvious that Juan was talking to the drug dealers because he’s in charge. But he’s not one of those evil homophobic dealers from the movies. When Chiron asks him what a Faggot is, he says its a word that people use to make gay people feel bad about themselves. Under his tutelage, Chiron doesn’t exactly blossom, but he starts to come out of himself a little.

Then one evening, Juan is working and he comes across Chiron’s mother, in a car with one of her male “friends” and demanding crack. Juan realizes that he bears a more direct responsibility for Chiron’s fate than is entirely comfortable. Worse still, soon after Chiron is at Juan’s house and asks directly if Juan sold his mother drugs. When he nods, reluctantly, Chiron storms out.

Chiron is a few years older, and much taller, but just as scrawny. He’s got most people to call him by his real name, but the bullies still call him Little. And there’s a schoolmate called Kevin who calls him “Black”. But, as Juan has said in the previous part, you shouldn’t have other people choose your nicknames.

Chiron and Kevin have a romantic fumble on the beach, but the next day, the bullies challenge Kevin to a game of knockdown. The rules of the game are simple – the bullies choose someone, and Kevin has to knock them to the ground. If the victim gets up, Kevin must hit them again. And again. Guess who the bullies are going to pick out?

Chiron takes his beating stoically, but something snaps. The next day, he storms into the schoolroom, picks up a chair and exacts his revenge. We last see him being bundled away in a police car.

Chiron is now in Georgia, having spent some time in a Young Offenders institution. He has been doing weights, and has an earring, gold teeth, a chain necklace and the sort of hat that Juan used to wear. You wouldn’t fuck with him now. He’s in charge of an operation dealing drugs, and takes great enjoyment messing with the heads of his scared underlings.

Out of the blue, Kevin rings. He’s also spent some time inside, where he learnt how to cook. He’s now working as a chef in a diner back in Miami. If Chiron’s ever in the area, he should drop by. Chiron gets in the car, pausing only to visit his recovering mother, and is very soon in the Diner.

Kevin is delighted to see Chiron, and plies him with chat and red wine. Chiron is still his old reticent self, but is obviously enjoying the experience. Then Kevin brings out a photo of Kevin Junior and the atmosphere changes. They do end up back at Kevin’s place, but the atmosphere is more one of contrition than of celebration.

I do hope there weren’t too many plot spoilers in there, but the film is a few years old now. And its bloody Moonlight. If you haven’t seen it by now, you’ve only yourself to blame. I must admit I’d only seen it once before – as far as I remember in a plane (do you remember the days we used to fly places? And if we flew far enough they’d show us films). Probably as a reaction to the unremitting hype, I decided that the film was ok, and probably important, but wasn’t all that.

Boy, was I wrong. This is a film about betrayal and regret, and race and class and sexuality, which is deftly handled without being too preachy or sentimental. But I guess you knew all that already. I’m just glad to be finally back on board. And what happened to that talented director who helmed it all? Oh, he went on to make Beale Street, a film which fits the “worthy but underwhelming” label much more snugly.

But Moonlight is something else. Did anyone else tell you already that its great? Oh. Sorry to be in so late at this particular party.