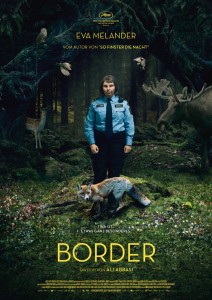 There are some films where trying to summarize what happens when all you have available is words seems woefully inadequate. It’s like (citation required, but i reckon it was frank zappa) compared music journalism to dancing about architecture. The one medium is insufficient to describe the other

So it is with Border – you either go with it or you don’t. I largely went with it, though maybe not as ecstatically as some of the reviews

Its about the ugly and the excluded, who are (literally) not like other people. It’s about customs officers who can smell out wrongdoers and about naked romps in the woods.

If i were in a different mood I think I would have got very annoyed indeed, but it was quirky enough to keep you engaged. I wouldn’t want every film I see to be like this but once in a while adds to the diversity of life