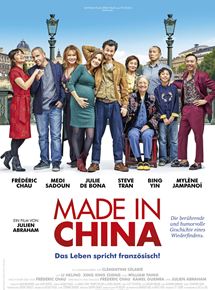 Francois grew up in Saint Denis, and gets extremely irritated at parties when strangers ask him where he’s “really” from. Because his family is Chinese, it seems that many people will never accept him as being truly French. Yet he hasn’t seen any of this family for 10 years because of a row with his father. Its only when his (‘really’ French) partner becomes pregnant that he decides to seek them out.

Made in China is billed as a Culture-Clash film, of which there have been several recently. These tend to fall into two categories. First there are the outright reactionary films, where the migrant protagonist (usually a Muslim woman) spends the film trying to escape her barbaric culture and embrace Westernness. It is as if racism could be easily solved if all these people with darker skins just learned a form of atheist-Christian tolerance. Isn’t it intolerable that they can’t do that?

It is to Made in China’s credit that it doesn’t indulge any of these xenophobic clichés. The Chinese people shown in the film are in turns charming, caring and insufferable, but the charm/care/insufferability isn’t attributed to them being Chinese but because there are people like that in all cultures. Even so, it does cling too hard to the idea of culture as being impenetrable and unchanging.

Here’s what I mean. Francois had a row with his dad a decade ago. That apparently caused him to break off with all his family, friends and anyone who looks like him. Similarly none of his former social circle seems to have ever used any of the intervening years to break out of Chinatown. So all scenes take place in either a “French” or a “Chinese” setting where some people are irreconcilably out of place.

Under these conditions, Francois is not seen as someone who profits from a range of different cultural influences, but a tragic figure, who is unable to join in when the family start singing a song in Chinese. Similarly when his friend Bruno gets involved with a Chinese woman, this is mainly played for laughs at the cultural misunderstandings. The idea that a combination of cultures could be a good thing is never explicitly rejected, but nor is it particularly entertained.

Don’t get me wrong, I didn’t dislike the film – but after seeing the trailer I was looking forward to an attempt to understand the different pulls experienced by someone living in a dominant culture which is different to what he grew up in – like an Educating Rita, where the working class woman is replaced by a Chinese French man. But while Educating Rita was about overcoming (and somehow synthesising) both the hardships of poverty and the insensitivity of academia, this one seems to be saying, you’ve got your choice – being French or being Chinese. Which is it to be?

Well, almost. There is a third choice, which is Family, as shown in the final scenes where the “French” people and the “Chinese” people who haven’t met each other until now come together to be photographed with the newly-born baby. But this ultimately substitutes one set of stereotypical assumptions for another – the Family which is shown to unify is one where everyone smiles (or at least tries to smile) for the camera, and no-one holds contradictory beliefs. Which is all a little too sentimental for my tastes.

Or maybe it was just a simple film with a few jokes. But if it were that, the jokes could have been a lot better. Ok, but nothing worth making a fuss about.