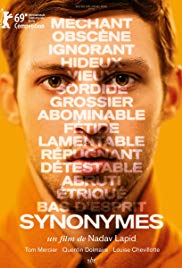 Yoav arrives, rucksack on back, at a large apartment in the posh part of Paris. He knows where to find the key under the mat, and goes in and takes a shower. While he is showering (one of many gratuitous scenes of Yoav in the buff) someone slips in and nicks his rucksack. He rushes out but can’t find who it was, and none of the neighbours seems keen to open up their door to a nude Israeli, showing to all the world that he’s been circumsized.

Yoav passes out in the bath and falls into some cold-induced coma. The film has been going for less than 5 minutes and I’m already having the internal monologue: “What? Really?” Fortunately, he is discovered by the rich couple who live upstairs who shower him with clothes, an iPhone and money. The offer to let him stay, but he’s got another flat that he can go to. The “What? Really?” internal screams are starting to reach fever pitch.

Yoav has recently finished his military service, hates Israel and refuses to speak Hebrew any more. Yet this dramatic decision is delivered almost unpolitically, with no real explanation. As the film goes on, we get occasional flashbacks to his time in the army, which he says he enjoyed “too much”, but the most that we get is vague allusion.

The film is called “Synonyms”, partly I guess because of the French words that he spits out while wondering round the city, trying to learn the language. But “Duke”, “Duchess”, “Prince”, “Princess” are NOT synonyms. They’re words that occupy roughly the same ballpark but are not interchangeable.

I guess the other reason for the film’s title is that its hinting at a broader truth, that the often barely coherent scenes that we see here are making Profound Statements about, who knows what? Nationalism? Militarism? Annoying young men who barge in being a bit of a dick? I have a similar attitude than I do to the supposedly radically political art of Joseph Beuys. If no-one is able to understand what you’re trying to say without footnotes, you’re not being metaphoric (still less a synonym), you’re just indulging yourself.

There are occasional scenes that look like they might be going somewhere. Yoav attends an “integration” class where he learns that everyone is equal in laizistic France and is encouraged to declaim the Marseillaise. Yet even here, there is not enough context for this to be any more than a director’s party piece, taking us nowhere.

Shortly afterwards, he goes to a music performance, and afterwards berates the musicians, apparently because there’s freedom of speech in France. But he is so boorish that its hard to believe that we’re supposed to sympathise with him – so what are we expected to feel her? Should we feel sorry for him? Should we be appalled?

Apparently the film is about the difficult of belonging of people who leave one country for another, but it betrays its First World sense of entitlement. Your average Syrian family fleeing war and torture won’t have money thrust in their hands, and if they do and still carry on being offensive to all around them, they’re more likely to get a visit from the local police than be offered a job at the embassy.

But at least Yoav who isn’t as bad as his mate who goes round bars and train carriages shouting that he’s a Jew and loudly humming traditional Jewish songs while staring at people from an inch away, presumably trying to provoke them into reacting violently and proving their anti-semitism. There may have been an intended profound statement here, but if there was, I got lost in the smug self-congratulation.

And what do you know? “Synonyms” won the Golden Bear at this year’s Berlinale and a load of 10 star reviews. It also got a lot of 0 and 1 star reviews and little in between. So some people got what it was trying to do and were prepared to indulge it. I just wasn’t and didn’t.