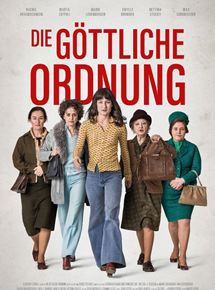 A lovely little Swiss film around that country’s 1971 referendum on whether women should be allowed to vote (yes, you read that right). Its not always that subtle, but in the face of women not being allowed to take a job without their husband’s permission and girls being sent to a juvenile prison for not much more than having a boyfriend, there’s often not much to be subtle about.

It also doesn’t fall into the trap of many political films which merely show an inexorable march to an inevitable victory. The women are in a conservative village. They must learn how to become active, how you book a room and pay for leaflets. Once they’ve done all that they need to learn how you survive in the first stages when you’re in a clear minority.

They often despair but they never give up, despite the scaremongering of a much better resourced opposition (this film should be compulsory viewing for the current leadership of the British Labour Party)

While I would have occasional minor quibbles with some of the strategy (this is a good thing: you don’t want a film that simply reproduces what you already think) it gets the basics right. This is a struggle led by women, and after they get over their initial trepidation, it is mainly women who take part. Yet you do see some male faces on the demos, particularly in the big city of Zürich, and it is maybe significant that the biggest opponent to the law change is the female factory owner.

At the end, the different protagonists either renegotiate or leave their old stultified relationships. Not everyone reacts in the same way – this is typical of a film which shows dynamic development rather than a story of righteous women and their evil husbands (and the best of these husbands are forced to deal with their old sense of entitlement).

And the end of the film the (almost entirely female) audience burst into applause. Its a shame it was only on for one night (presumably to do with Internationals Women’s Day). Wulf Sörgel if you’re planning a screening at the Moviemento I’ll gladly send people your way.