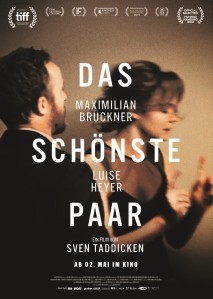 Malte and Liv are the eponymous most beautiful couple, who we first meet fucking on a beach in mallorca. Soon afterwards they are robbed and she is raped by a group of German lads.

The rest of the film is basically about their coming to terms with this. He boxes and plays bass in a dodgy covers band while she makes prolonged visits to a therapist. Then by chance malte sees the rapist, follows him home and makes everything increasingly about himself.

It’s mainly soap opera stuff, which is fine as i like soap operas. You sometimes want liv to scream and shout a bit more, even if it’s just about malte’s smug beard, but it’s only by trying to relegate the events to the past that she’s able to keep things together.

It’s an intelligent film – sometimes too intelligent for its own good: would you really start talking to a barmaid by telling her about Berthold Brecht’s Pirate Jenny and asking if she has a pirate back at home? Its not really doing anything that hasn’t been done already, but it executes its very competently.

There are also two musical highlights – a very bleak karaoke version of Karma Police by the rapists girlfriend after she finds out what he’s done, and Tindersticks’ always brilliant Rented Rooms over the end credits. Can’t go wrong with a depressing song or two.