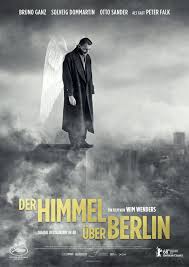 Berlin, the 1980s. Angels played by Bruno Ganz and Otto Sander are at their preferred location of the Siegessäule (Victory Column), looking down on the Brandenburg Gate with the Alexanderplatz television tower and the East visible in the background. They wear ponytails and a pair of wings is peeking out of Ganz’s standard issue long black jacket.

The camera sweeps with them through tower blocks as we hear the alienated thoughts of all the inhabitants. The angels may be able to hear all these thoughts and put the occasional comforting hand on a shoulder, but they are unable to use their senses or directly influence the “real” world. Later on in the film, an arm round a shoulder is followed by someone jumping to his death. No-one notices them apart from the kids who stare up into the sky when they are flying overhead.

Among the millions of lonely individuals, there’s a new face in town – a character called “the Film Star”, played by Peter Falk. The Film Star’s first name is Peter and he spends a protracted scene trying on different hats, wondering what Columbo would wear. He’s here to play the part of a detective in a film set in war-torn Berlin. In his spare time, he sketches extras with Judensterne pinned to their chest.

Bruno starts to get obsessed with Marion, a trapeze artist and member of a French circus troupe. He attends her performances, enjoying the opportunity to look upwards for a change. He starts to follow her to Nick Cave concerts and to dance with her, even though she’s unaware of his presence. As she lies in bed, he lies next to her. If were to you stop to think, its all a little creepy.

Bruno makes contact with The Film Star, who can’t see him but is aware of his presence. In a monologue addressing the angel that he knows is out there somewhere, The Film Star offers his hand and extols the sensory perception of drinking warm coffee and smoking, preferable both at once. Bruno is gradually convinced to give up all this angel stuff and try to follow a mortal life with Marion.

Wings of Desire looks indisputably superb (I hadn’t noticed before that the first assistant director was the superlative Claire Denis) and sounds good – with a script by Peter Handke and some vital songs by Nick Cave and the Bad Seeds. But every so often, you worry that you’re sat in the middle of a big con. Not least because I’m sure that the film is loved by all sorts of people who I would hate (basically the same people who think that director Wim Wenders got cooler when he started hanging around with Bono).

And yet, there’s always something that makes you think that this isn’t just meaningless pretension, and that there’s something here worth watching. And the thing that grounds you is almost always Peter Falk. Like Columbo, he’s always there with a wisecrack, ready to prick the bubble of anyone who starts to take this a little too seriously. And when he’s walking through bombsite Berlin and a group of lads shout “Hey, Columbo!”, it is more funny than it has any right to be.

Added to this the film – released 2 years before the fall of the Berlin wall – occupies a specific part of history. Until the very end, we see nothing of the wall itself – apparently filming was banned, so what we do see is a model – yet it is such a very different Berlin to today, more like the bombed out shell in the film that The Film Star is making than anything we know today. I watched it in the open air cinema near Potsdamer Platz, so it was strange to see the same place in rubble on screen.

Wings of Desire works when we don’t spend any time thinking about what any of it is supposed to mean. If we start to try to unpick any of the metaphors I’m sure we would lose the attraction of something that plays in front of us like a symphony. If we appreciate it for what it is, we’ll be happy. But I still can’t help thinking that it may just all be vacuous nonsense.