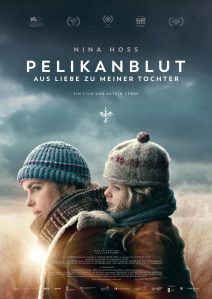 A field used for training police horses. Their riders try to ride them through fire, banners, and while having big rubber balls bounced at them. One of the horses cuts loose, throwing its rider. A blonde woman rushes towards the horse, calms it down, and brings it to a halt. Ladies and gentlemen, we may just have stumbled across a metaphor.

Wiebke (Nina Hoss) is a horse trainer. She lives on a farm with her adoptive daughter, Nicolina, aged 9. She’s about to adopt or foster another kid, the 5-year old Raya (Katerina Lipovska). As single women in Germany aren’t allowed to adopt German kids, Wiebke is taking Raya from Bulgaria.

At first, Raya is a sweet blonde moppet. Then she starts screaming loudly whenever she doesn’t get her way. She smothers the bathroom with shit and practises a little popup arson. If anyone gets in her way, she bites them. One by one, the other kids stop playing with Raya and their mothers shun Wiebke, eventially getting Raya expelled from the nursery.

Wiebke sends Raya to a child psychiatrist who produces a brain scan which shows that she is incapable of empathy or fear. This is not just a physical problem. Raya’s mother was a prostitute who was killed by one of her clients. The first 2 days of Raya’s life were spent at her mother’s side, waiting for someone to find the body.

Wiebke didn’t really have many people to turn to in the first place. There is Benedikt, the copper who keeps coming on to her and whom she slightly fancies, but he’s more interested in telling her what to do than listening to what she has to say. There is Nicolina, of course, but she’s only 9, and is showing increasing signs of jealousy at the attention being paid to her new sister.

It is at this stage that things start to get seriously strange. Wiebke decides that Raya was never able to enjoy a proper babyhood, so starts carrying her in a papoose and breast feeding her. Things then go all Midsommar – and not really in a good way – when Wiebke finds a practitioner of black magic and asks her to try to exorcise Raya.

I read a review of Pelikanblut which accused it of being anti-science. I think this slightly misses the point. The film is full of scientists and doctors offering sensible advice. At first, Wiebke is minded to follow their advice, eventually handing Raya over to a special school. But when she sees the staff rough-handling Raya, Wiebke grabs her back. It is only then that she moves towards the occult. The fact that Wiebke ends up ignoring sound advice does not mean that writer/director Katrin Gebbe is endorsing her actions. Quite the opposite,

At first, the film shows us the problems that Raya is causing. Increasingly, though, it raises the question whether Wiebke is really a fit mother. Before taking Raya to the special school, she worries that there would be no-one there to love her. But we have already seen that Raya is incapable of recognising love. And it’s not at all clear that an increasingly deranged and exhausted Wiebke is capable of giving it.

Pelikanblut does suffer from being released so soon after the superlative Systemsprenger, which also dealt with a traumatized girl who had gone out of control after suffering tragedy as a baby. And, unlike Pelikanblut, Systemsprenger holds its nerve and does not take the sudden swerve towards the end which weakens the film’s credibility. It is also a significantly better film in its writing and structure.

But saying that Pelikanblut is not as good as Systemsprenger is not a helpful comparison, as 99% of all films ever are not as good as Systemsprenger. The fact that Lipovska’s is only the second best recent performance of a young, blonde girl working her way through the effects of trauma doesn’t negate the fact that she is very good indeed – both adorable and terrifying, sometimes both at the same time.

Nina Hoss is, as ever, superb, showing the steady degeneration of a once capable woman. The bags under her eyes get increasingly large as she silently falls apart. For all the medical staff and social workers offering to help, for all Benedikt’s occasional offers of help and much more frequent orders of how she should lead her life, she’s on her own for most of the time.

If you leave half an hour before the end, you won’t miss much. There is an ambiguous ending which hints at the effectiveness of exorcisms (possibly due to the placebo effect), but by this time things have got much too silly for us to care much. But the film has already built enough good will for us to be able to indulge the slightly stupid ending.