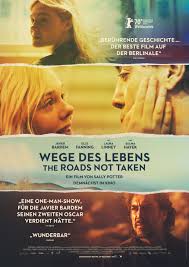 A dingy room in Brooklyn, not far from the railway. The phone is ringing. A body lies in bed and you’re not sure whether its owner is ignoring the phone or has become so used to the constant noise of the trains that he’s still asleep. The doorbell rings. And rings. The body’s owner opens his eyes, but keeps on lying there.

Leo (Javier Bardem) has a problem. He has the onset of dementia, and communication is difficult. He also seems to be very, very weary. His daughter (Elle Fanning) tries to placate him using a mixture of English and Spanish, but she also has a job to do. There’s also a live-in carer, but Leo’s problems seem to be locked in a mind that is inaccessible to anyone else.

Today, the daughter is taking the morning off to do some chores with Leo – a dentist’s appointment, an eye test, that sort of thing. Everything becomes more complicated than expected. Leo pisses himself requiring an unplanned trip to buy trousers. He gashes his head which needs a hospital visit. Suddenly the morning becomes a whole day, and the daughter takes increasingly agitated calls from work.

Through all this time, Leo’s inarticulaty leads various people to question whether his brain is working at all. His daughter is affronted that they all speak to him although he’s in the room, but he barely reacts. Yet the audience knows that he is still thinking. The camera starts to follow his trains of thought, which seem to be a mixture of memories of his former lives, embellished with imaginings of what might have happened, had he taken a different road.

Leo’s thoughts cover two main areas, which sometimes merge into each other, like dreams. First there is Mexico, home of his first marriage. After the death of their son in a car accident, Leo’s wife turns increasingly to religion, yet he just can’t bring himself to follow her, initially refusing even to accompany her to the ceremony to mourn their lost child.

Leo’s imaginations then move to Greece, where he’s trying to break a bout of writer’s block. He’s married again and had a daughter this time, but the family is at home. He bumps into a group of female tourists and asks them which ending they prefer for his book. After 20 years in exile from your home country, is it better to return to your old family or stay where you are? Stay, they say, your family will have moved on. That was, apparently, the wrong answer.

Leo continues to pursue one of the women, even after she reminds him that she is probably the same age as the daughter he keeps banging on about. Watching them partying on a yacht, he paddles out towards them. Like most of Leo’s visions, this is interrupted by the return of his “real” life, via a question from a doctor or a sudden stop of a taxi.

I seem to be not in synch with most critics about director Sally Potter. Her last film, The Party was met by almost universal approval. Almost. Ironically, one of my objections was that it was a satire of Blairites and who was interested in them any more? (in many ways, 2017 was a long time ago). But I hold to the substantive part of my criticism.

Now, The Roads Not Taken is out and it seems to have gone over with most critics like a plate of cold sick. I really can’t understand why. Its a good enough film – more than that, its a good film. Its well acted, down to supporting roles for Salma Hayek and Laura Linney, and it has plenty to say about dreams and memory, and what it means to gradually lose control of your mind.

Leo is a tragic figure, trying to retain some dignity even when his own bladder is conspiring against him. And there is extra poignancy in that we can see that his mind is still working – not perfectly, but who’s is? – while even his loving daughter is starting to give up on him. If you ask me, it’s worth an hour and a half of anyone’s time. Anyone’s, apart from a load of critics, apparently.

File under: what do I know?