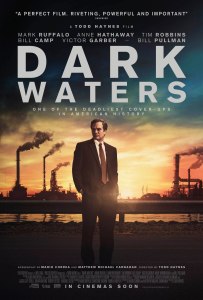 1975, West Virginia. A group of kids break through a fence topped with barbed wire to go swimming in a lake. One of them remarks that the water’s warmer than normal. Another suddenly finds something and calls the others over. Out of nowhere a boat appears carrying security guards who tell the kids to get out of there sharpish.

Cut to: A corporate lawyers’ office in Ohio. Rob is about to be made a partner. He is pulled out from his high level meeting because someone’s turned up at reception. It’s an ageing man with a working class accent. He says he knows Rob’s granny and brings a series of videos and urges Rob to watch them to see how his cows’ teeth are turning black and they’re dying for no apparent reason.

This is a film where we learn the whys fairly early on. The cows are being poisoned by DuPont, the makers of Teflon, who have been dumping pollutants in the water. And DuPont know this is happening, as several of their workers have developed cancer or given birth to deformed babies. The problem is, DuPont has the government in its pocket and can buy its way out of any legal difficulties.

This is the story of one man against a faceless and all-powerful multinational. The story that it tells of corporate greed and the persistence required to overcome it is inspiring and deserves to be heard by all (come on, this is hardly a plot spoiler. This sort of film never gets made if the good guy doesn’t win). The trouble is, I’m not sure if film is a suitable medium to show it.

The legal challenge against DuPont takes decades, as the corporation knows that it can issue legal challenges which slow down procedure. Which means we see a lot of court scenes, a lot of scientists explaining polymers and a lot of Rob reading his way through a large room full of boxes of papers. That’s in the first half of the film. After that we don’t even see Rob doing his tedious work.

By a cunning trick, Rob’s legal team organise blood tests for most of the town. They then must wait for the results. And wait. If Rob’s job was boring before, it’s no longer interesting enough for us to see any of it. Instead, we see his home life, too concentrated on his work to spend any time with his kids. His health also deteriorates. His hand constantly shakes and he eventually collapses.

Now here’s the problem. We are watching Rob fall apart because his work is taking up all his time, yet we’re not allowed a peek of what it is that he’s actually doing. What this does is build Rob up as a socially inept superhero, who is able to take on big business single handedly in a way that his hick clients (and audience) is not able to comprehend.

The film stars leading Hollywood left-liberals like Mark Ruffalo and a grey haired Tim Robbins. Ruffalo, as Rob, is even given a great anti-capitalist speech, where he explains how companies like DuPont are able to use their money to literally get away with murder. If they defeat Rob, it will be a sign that “even he can’t crack the maze and he’s helped build it. The system is rigged”

Rob goes on to say “we protect us, we do, nobody else. Not the companies, not the scientists, not the government. Us.” There is even a scene of about 50 people demonstrating and threatening to keep up the struggle if nothing changes. Yet there is no real “we” in the resistance. In the 4-5 years waiting for the blood test results there is no collective struggle. All that happens is Rob gets iller, neglects his family, then suddenly wins.

There is a weakness in the film’s politics, which we see in the traditional one man against the world structure. Ordinary people have walk on parts with their hick accents, but they need experts to save them. And for all the anti-capitalist talk, the problem is not really systemic. Rob’s boss indulges him and gives him time off his day job defending Corporations because DuPont haven’t followed the rules (unlike other money grabbing corporations, it is inferred).

Should you go to see this film? Absolutely because everybody needs to hear its little heard tale of corporate negligence. Did I enjoy the film? Well, not really, because it was awfully boring. Its plot is literally based on a newspaper story, but once it has convincingly told us early on that Big Business is evil, it has little more to say. My tip: join in the after-show discussion, but you can probably skip actually watching it if you read the newspaper piece instead.