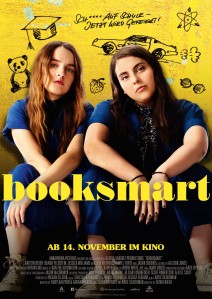 As the film goes on, we learn that some of these stereotypes have their own hidden ambitions and just want to be accepted as they really are, though seeing as they’re never afforded any real salient characteristics, this just means that they’re a different film stereotype – the misunderstood kid. If the camerawork matched the scripting, Amy and Molly would be always shown in tight focus with everyone else a grey blur somewhere in the background.

But, wait a minute, some Plot Development just in. While everyone else has been partying, Amy and Molly have spent all their time studying – even their fake IDs are to get into the University library. As a result, they’re going to Yale and Columbia. But it turns out that all their hedonistic school colleagues have also got into élite Universities. If Amy and Molly don’t find a party tonight, they’ll have wasted their young lives.

Can we step outside the plot one moment here. All their colleagues have got into élite universities, although they are clearly almost universally thick as pigshit? Now I’ll accept that there are schools which this happens (for which the boarding fees are suitably high). But just one minute ago, you were ridiculing a pair of characters as being part of the 1%.

The truth is, Booksmart is a little ambiguous about how poor its protagonists are. I think they’re supposed to be People Like Uz, but all the teenagers have their own cars, and they live in pretty swish houses. When one throws a party because his aunt is on holiday abroad, everyone seems to be quite accustomed to the swimming pool in the garden. I don’t remember any of that from Tong Comprehensive.

Anyway, we’ll let this pass for a minute. Amy and Molly need to find a party, and because they’ve never mixed socially, they don’t know where it is. So they ring up various taxi services (because, of course, that’s what poor kids do) and after a few misdirections, they are able to endure the excitements and tribulations expected of this sort of film.

And here is my big problem, as much with myself as with the film itself. Yes it does try to subvert some of the form – one of the characters is an out lesbian who is not tormented by her sexuality, and the other is chubbier than is usually allowed in a teen flick. This is, of course, to be welcomed, but much less is being said about high school graduation than was by Dazed and Confused over 25 years ago (or indeed Baby, Its You, 10 years before that).

However much Booksmart may be trying to offer something new (and I honestly don’t know whether it is) it is in thrall to the old conventions. Yes, Amy and Molly are smart, and are not ashamed of this, and their walls are smothered with feminist posters. But their main aspiration is to be accepted by the cool kids. For all the apparent pretentions towards challenging societal expectations, no old assumptions are really challenged.

There is one scene, one scene, where we catch the sniff of an alternative. Amy and Molly are at a party, and get into a real fight. Until now, they have been insperable, but here you get a glimpse of the asymmetric nature of their relationship. As they are the only characters who have been allowed any personality, we suddenly see some character development. And then the fight is over and we’re back to how we were.

This is all a shame. The film is the directorial debut of Olivia Wilde, who I think is a very fine and intelligent actress. Yet it seems to bear more of the imprint of its producer Will Ferrell (this may be a character assassination on my part. I tend to avoid Will Ferrell films as I assume that they’re bantertastic braggadacios about people I don’t care about. Which means that I haven’t seen enough to know whether they’re really like that). Yes the film is woke and respectably liberal, but it just seems so dramatically conservative.

Of course, this may just be me. Booksmart has been almost universally critically lauded, including by the reviewers that I normally trust. Maybe I just didn’t get it. But hey, its my review not yours – that’s my prerogative. Go and try it for yourself, but don’t say that I sent you.