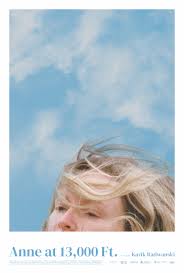 Anne works in a daycare centre, helping kids, many of whom have social problems. But she is barely a kid herself and has her own problems. Her co-workers keep telling her to stop playing with the kids and to start supervising them. This is not just them being shitty – these kids need looking after. But it seems that Anne needs looking after as well.

She often zones out or gets into unnecessary conflicts. When confronted with a difficult situation, she feels threatened, and often runs out. At one stage, she goes to the top of a building to be able to see everything with a bit of distance. The camera helps reflect what’s going on in Anne’s head – it is always antagonistically poked into the faces of the protagonists and offers little breathing space.

A friend of Anne has what is apparently known as a bachelorette party. They go sky diving and Anne finally seems at peace with the world. Her eyes close, and her face looks truly tranquil. She doesn’t have to bother with any of that shit. As the film progresses, every so often our view shifts back to a relaxed Anne, floating serenely in the clouds.

At the party she also picks up a boyfriend, the slightly nerdy Matt. Matt is obviously transfixed by Anne and helps her back to her room after she incapacitates herself. Shortly afterwards, she’s inviting him to meet her parents and telling them that this is the man that she’s going to marry. She doesn’t tell them in advance that he’s coming round for tea, and when told that this is not how you’re supposed to behave, she laughs it all off as a joke.

Anne’s relationship with her parents is not great at the best of times. Her mother comes round, and things seem to be going fine till Anne becomes increasingly agitated. She just needs to get away, or to get her mum away. You get the feeling that this happens quite often, and that Anne is not always great in social situations.

So what is it all supposed to mean? Someone dared to ask this question in the Q&A after the screening. As the questioner went on a bit explaining why he was asking the question, director Kazik Radwanski interrupted him and said point blank “I’m not going to answer that question”. The film is what it is to you. Its not supposed to mean anything.

There seems to be some consensus that Anne at 13,000 feet is an observation of a girl/woman with some unspecified mental illness. Radwanski declines to name the illness, saying that this is for us to decide. There is certainly no generalised message to the public. Each viewer is to draw his or her individual conclusion.

I have some sympathy with this view towards Art. A film or a painting don’t need to mean anything. The moment you start to try to mediate their meaning with words, you are moving away from what makes them special as Art. I mean how can anyone convey in words just what is special in Picasso’s Guernica? (take this from someone who’s tried, but that’s a different story)

Having said that, not everything that is difficult to describe has the quality of Guernica. There’s plenty of pretentious crap out there that doesn’t bear up to a verbal description simply because they’re vacuous pieces of self-indulgence with nothing important to say. Now as it happens I think that Anne at 13,000 feet does have artistic value, but there are times when you think, is this as clever as it obviously thinks it is?

One last thing – Is Anne really ill? Now she obviously has social problems and is not very good at dealing with Other People, certainly not for long periods of time. But is this something which could or should be treated? I’m sure I can’t have been the only viewer to have seen something of themselves in Anne and to think, ok she needs to learn some coping mechanisms to get by in the world, but I wouldn’t want her to change too much.

The kids love Anne, seeing her as one of their own, and you can have a lot of sympathy for her desire not to have to take adult decisions. The trouble is that this adds pressure to the people she works with who have to take up the slack.

To return to the question that shouldn’t be asked, I have no idea either what Anne at 13,000 feet is supposed to be about or what it really is about. Reflecting on it made me think more than I was expecting though one of these thoughts was a worry that it was just a superficial fraud. But if so, it’s a well presented fraud, and the actors, largely improvising, are úniformly great. Maybe not the film of the year but worth going and making up your own mind.