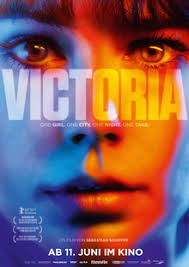 A night club. Underground. Dance music is playing and strobes are flashing. The camera pushes past various dancers to concentrate on one woman, dancing alone. As she dances, she pushes back her hair, trying to put it into a bun. A smile shows that she is having fun.

The woman moves to the bar and orders a large Schnapps – in English, as she says she can’t speak any German. As the toilet queue looks impossible, she decides that that’s it for tonight. But as she’s leaving the club, she bumps into a group of 4 lads, who are being refused admittance, either because they have no money, or because they’ve already been drinking some.

The lads introduce themselves as Sonne, Boxer, Blinker and Fuß. They’re real Berliners, they say, born and bred here – not like those carpetbaggers from the South or Victoria’s Madrid. They promise to show her the real Berlin – starting with drinks on a Dachterrasse – an improvised party area on the roof of high-rise flats.

Open air cinema often offers a good opportunity of revisiting films that you haven’t seen for a few years, to check whether they’re Any Good. Its particularly interesting with films which were based on one gimmick – and boy is Victoria based on one gimmick. Like Rope and Birdman, it claimed to be filmed using only one single continuous shot. Unlike Rope and Birdman, the claim was true.

This meant that the first time you watch Victoria, you are at least partially transfixed by the camera work, wondering how they managed it (this time round, I noticed the lack of reflective surfaces in which you’d catch a copy of the cameraman). It means that it is a film that impresses more than it makes you love it, though you must admit that most of the lighting and acting is superb.

But when your mind is not concentrating on the technical brilliance, you do notice a couple of flaws. Firstly, the opening – in real time because of the single shot – is, well, slightly dull. Maybe you enjoy spending a lot of time in the company of pissed lads, but it wears me down pretty quickly. Even Sonne, the most charming of the 4, spends a lot of time play fighting with his mates.

Secondly, boy are some of the plot holes big. The whole thing turns on a heist where Boxer is called at 4 in the morning and is told to turn up with 3 mates immediately. It’s to pay off an old debt to someone who protected him in prison, which is believable enough as far as it goes, but the idea that a bank job would be pulled off with so little forethought stretches credibility.

My final criticism might just have been from tonight’s showing, but the sound quality was terrible. Quite often, you weren’t sure whether you were hearing dialogue from the film or people chatting behind you (a problem which was further mitigated by the couple of blokes behind me chatting through much of the film). I could often only catch up with what was going on by the film being fully subtitled – as Victoria can’t speak German, the dialogue keeps switching between German and English.

First time round, I barely noticed any of these problems, as my mind was focussed elsewhere. And, I must admit, I can still forgive the film a lot of its imperfections. The dynamic between Victoria and Sonne, as they slowly fall in love, is delightful. On the surface, they are both full of braggadocio, yet on the several occasions where they must take their leave of each other, they turn their face away, rather than try an embarrassing attempt at a kiss.

Also, the multiplicity of languages actually works. Victoria works at the sort of shop which deserves a brick through the window – an organic café in the trendy part of Berlin-Mitte where it doesn’t matter that the staff can’t speak German. And yet she never comes over as an objectionable tourist. And her lack of German allows the lads to discuss important plot twists without her being aware of what’s going on.

In short, it’s definitely a film worth seeing, but its not the essential film that I thought it was first time round. Great rather than good, it’s definitely got some neat bits, but when you’re mind’s not distracted marvelling at the cleverness, the blemishes are a little too visible.