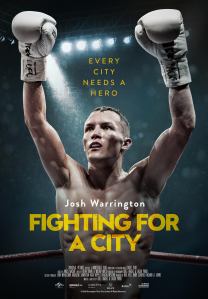 Industrial scenes. Some red brick terraces and a market that was once souped up but now is going to seed. Hang on a minute – they’re in Leeds. I suddenly have skin in this game. My mother was born and grew up in Leeds, and I lived a few years there as a kid, before moving to nearby Bradford.

This is the story of Josh Warrington, a young boxer from Leeds, who is still being trained by his dad. They both have local accents which are not at all difficult to understand, but someone has seen fit to add subtitles, but only at certain times. I spent most of the film trying to understand the logic which chose which scenes were deemed to need extra explanation.

I am not a boxing fan, which isn’t a problem of itself. The best documentaries get you interested in subjects which you had formerly found utterly boring. And yet there are occasions where I feel that I am intruding on someone else’s party. By the end of the film, Josh is fighting in front of 20,000 people in an open air bout at Elland Road. So he must be famous, right? I honestly don’t know.

Well if he is as famous as I guess he must be, Josh is remarkably down to earth. I know he doesn’t live in the estates that are filmed as being “typical” of Leeds, but he seems to be humble and unassuming. While he doesn’t look comfortable with all the braggadocio that goes with the territory of professional boxing, one of the most pleasing scenes is of him chattering away to his baby daughter.

During the course of the film, Josh marries, and his wife has twins. As time passes, they try to set up a world champion fight with Welsh boxer Lee Selby. The problem is that Selby doesn’t rate him much, with some good reason as the Welshman is taller, stronger and has a better technique. So Josh’s dad has to organise a series of bouts with lesser boxers, to prove that his son is a worthy contender.

These are the parts of the film that don’t really work for me. I’m sure that if you enjoy this sort of stuff, watching low-level boxing matches is exciting and if you can distinguish between different pairs of men hitting each other, then I’m sure there’s plenty there for you. But I was much more interested in Josh the man, than as a boxer and the fight scenes just passed me by.

Quite often, the film threatens to stray into quite interesting territory, then just fizzles out. Josh makes an offhand and typically self-depecrating comment about being paid to get beaten up, but the film goes nowhere with it. Is he happy with his job? Is his wife? She seems to be just content to cheer along, but then again she’s never asked.

This is fairly typical of a film which doesn’t seem very interested in life outside the world of Josh and his immediate family. That’s ok as far as it goes – he’s a very affable and engaging man – but you get the feeling that we’re missing other things out there.

For example, even though he’s packing out large football stadiums, he still personally drops tickets off at the people who’ve been watching him fight since the very beginning. I’d love to hear more from these people – why do they follow Josh? How have things changed? And yet they are only allowed to hang around in the background but are never asked what they think.

This problem is most visible when discussing city loyalties. The film is called “Fighting for a city”. Josh is very proud of coming from Leeds – its not a coincidence that he walks on to music by the Kaiser Chiefs. Many of his supporters think the same. But what makes Leeds different to anywhere else? Is it simple regional loyalties, or is there something particular about the industrial North? These questions were always interesting, but in post-Brexit Britain, they carry an increased potency. But they are never really posed.

It is interesting, in this context, to see the IMDB description of the film, which says the following: “the film is set against the backdrop of one city; Leeds. Half aspirational professionals and students, half austerity ravaged estates, Leeds is a schizophrenic metaphor for England in 2016. Our boxer bridges the two because this is a city in need of a hero.”

Now that sounds like an interesting film, but it wasn’t the one I saw. In the massive crowds that attend Josh’s fights there is a huge preponderance of white men, who do not reflect the Leeds that I know. Now of course the attendees of a boxing match do not represent a whole city, but I find it peculiar that Josh’s bouts are believed to stride a cultural divide that they obviously do not.

Watching the film did make me want to know more about Josh Warrington and his family, who seemed to be People like Uz. At the same time, it came nowhere close to convincing me that paying money to see young men hit each other is anything that should be categorized as sport. And I felt too often that there was an interesting story hiding here that just wasn’t being told. Ok but could do better.