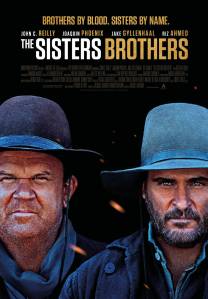 There’s a lot of Stuff going on in the Sisters Brothers. There’s the alcoholic bounty hunter going around the Wild West killing people for money. There’s his brother who does most of the heavy lifting while carrying a permanent look of disappointment. There’s the idealistic scientist who has come up with a plan of using chemistry to solve the Gold Rush. And there’s the pensive writer sent to track him down who ends up joining his scheme.

On top of that there’s all sorts of fires, of improbable gunfights, of puking and of severing limbs. As said, there’s loads of Stuff. Yet somehow none of the Stuff really seems to hang together. At the end i asked myself “Well that was all very well but what was the point in that?” It was genial but not quite funny enough to be a comedy. It was well acted but didn’t really have enough plot to be a drama. It was ok. But i guess i want more than ok from jacques audiard