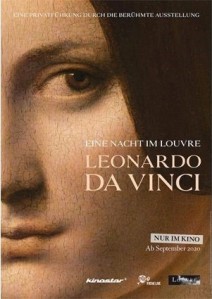 This film is essentially a promo for an exhibition that played in the Louvre last year to commemorate the 500th anniversary of da Vinci’s death. It’s none the worse for that and contains a wealth of interesting information about how the artist’s style developed as a result of changes in society and his growing interest in science.

Every so often, a couple of men in black turn up – one in a polo neck, one in a shirt with the top button open. These are the curators of the exhibition, and take us through it. Sometimes, one of them appears in front of the camera. At other times they stand together, as one speaks and the other looks on awkwardly, pretending to be hearing this for the first time ever.

For most of the time, though, we are guided by an unseen female narrator. She explains the various breakthroughs in da Vinci’s work, starting with the introduction of oil paint from Northen Europe. Before then, paint has been thickened with eggs, which had place certain limitations on an artist’s ability to influence colour and shading.

Da Vinci was particularly interested in how a two-dimensional canvass could be used to represent a three-dimensional world. He was also aware of Heraclitus’s maxim that you can’t enter the same river twice. A painting (or a photo for that matter) may be able to capture a snapshot of a scene, but the world never stops moving. Much of da Vinci’s art was an attempt to capture this movement.

His main weapon in doing this was light and shade. We are shown several examples of how he used shading to give the appearance of movement – an anticipation of what was about to happen, and a recollection of what has just happened. It is all the more sad, then, that the ageing process means that many of his works no longer contain what he painted. The Last Supper is a copy of the Milanese original, made by one of Leonardo’s pupils. And so much extra paint has been applied to restore the Mona Lisa that it is arguably now a different picture.

Many of the pictures shown have sacred subject matter, and it might have been nice to hear more about this. Nonetheless, we get an excellent explanation of the individual pictures but I do think that at one instance the cart is placed before the horse. On 2 different paintings of Madonna and Child we are told that Mary is contemplating the sacrifice that her son will make for the world, and Jesus is anticipating his death.

Now I don’t dispute that there was contemporary theological discussion about the immensity of the sacrifice of Jesus, and even that of Mary, and the degree to which this may have affected their thoughts. But this is really not what I see in the pictures. I see a woman laughing with a strangely oversized baby on her lap. I would challenge anyone to look at the paintings without a prep sheet and say “oh, that baby looks like it’s contemplating the fact that it will die for all of our sins in about 30 years”.

We are also told that da Vinci reconciled his twin interests in art and science by subsuming all his scientific interests into his art. Now this seems to me to slightly downplay the invention of a prototype helicopter. But it does raise an interesting question. We have already seen how da Vinci’s artistic sketches deliberately invoked movement. Yet the few glimpses of his draftmanship that we see should have the opposite effect – to show things as they are now and not how they were or will be. This apparent contradiction flittered through my mind. but it is not pursued in the film.

At the end, we get to see the Mona Lisa – which isn’t part of the exhibition, mainly because the exhibition hall can only cope with a maximum of 10,000 visitors in a day compared to the 30,000 who are herded past the Mona Lisa. To be honest, Lisa’s appearance feels more like an obligatory add-on than any explanation of how the she fits in with da Vinci’s artistic developments described earlier in the film. But a film about da Vinci which is set in the Louvre would have been just perverse if it didn’t acknowledge the museum’s most visited work.

Notwithstanding any minor misgivings, this is a fascinating film packed with useful information. We see da Vinci of being both ahead of and of his time – able to innovate but only with the materials and the ideas that were available to him. And it is really quite incredible to see how much he was able to transcend the trend for just depicting static objects, centuries before, say, Impressionism tried to achieve essentially the same goals.

I guess that the exhibition is over now, which is a shame. But at least this film captures its essence, and is well worth a visit.