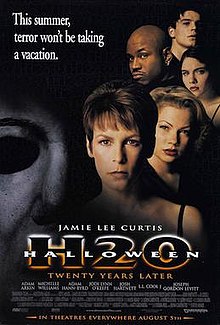 Illinois, October 29th 1998. The film opens with someone bringing a large kitchen knife heavily down onto … a pumpkin. Hallowe’en is coming up, after all. In among the festivities, a woman comes home to find that someone’s broken in. A couple of local lads look round for her, and despite a couple of jump scares and an insistent soundtrack, no-one’s there any more.

Her office is a mess, though. A pair of policemen say that she was one of the medical staff treating Michael Myers. Shortly afterwards, we see that one of her files has been empty – that of Laurie Strode. Now I can’t remember whether I ever saw the original Halloween, and I certainly missed most of its poor sequels (this is sequel #6), but it’s been implanted deep enough into popular culture for those 2 names to be somewhat familiar.

Cut to: Northern California. A woman is having nightmares of being followed by a killer in a mask. People call her Keri Tate, but because she looks like Jamie Lee Curtis we know that she’s Laurie Strode. Laurie/Keri is now the headmistress of a posh private school, has a cabinet full of pills to try to calm her down, and is a functioning alcoholic.

She is also highly protective of her son, John, especially as we’re coming up to the twentieth anniversary of when her brother went on a killing spree. She forbids John from going to a school trip to Yosemite, which is fine by him as while everyone’s out in the parklands he’s planning an illicit party with his mate and their girlfriends. What could possibly go wrong?

Halloween H20 came out a couple of years after Scream and was produced by Kevin Williamson. It shows, not just because in one scene, Scream is playing on the background telly. The main reason for Scream’s success was that horror films had become formulaic and gorey, but there is very little blood here – and what violence there is mainly appears off screen. It also relies more on suspense and things not happening than on too much action.

We see many tropes which are not new to the franchise. Myers lopes menacingly, a psychopath who is unable to do much more than aimlessly kill. And Laurie is kick-ass, and more a Ripley-from-Alien than your usual horror heroine who is helpless and shrieks at the first sense of danger. In this film, it is the male characters who are unreliable – impetuously shooting off at the first creak in the floorboards.

Of course much of the plot is risible and requires lights and phones to stop working at exactly the wrong time and people who stay and fight when anyone with any sanity would just run the hell out of there. But if you’re the sort of person who goes into a horror film saying “but that wouldn’t happen in real life”, this is probably not your film. All conventions are adhered to, and that’s good enough for me.

What’s more, although the conventions are respected, they are often subverted. There are countless scenes when the background music urges you to think that a killer is about to pounce, but most times there is no-one there, or – more often – the characters are surprized by friend or relations, but are just so agitated that they fear everyone.

And this is where I think that Halloween H20 is at its strongest. Laurie is not a reliable narrator – she’s dependent on drink and drugs and already worked up into such a frenzy that she has visions of her dangerous brother long before he actuakky turns up in California. This is not just a film about scary things which really exist – the greatest fears lie in Laurie’s head.

Is it a plot spoiler to explain things that don’t happen? Maybe, so I’ll just be very vague. But the scene of trying to rescue a corkscrew from what US-Americans call a garbage disposal is just the most memorable of many instances when the film shocks us when nothing happens. Despite our previous let downs, we are convinced that this time something really important and scary is going to happen. And then the camera pulls back to nothing. More fool us.

If you want to find reasons not to like Halloween H20, then I’m sure you can, but if that’s the case you should just get over yourself. Stop taking yourself so seriously, and just enjoy the fun.