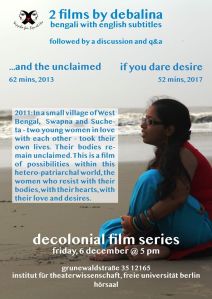 Double Bill as part of the Decolonial Film Series at the Freie Universität. One is a documentary, the other a drama, but both cover the case of two young women, Swapa and Sucheta in West Bengal. In 2011, unable to pursue their love together, both committed suicide. The family didn’t bother to claim the bodies, which were thrown on an anonymous funeral pyre by the police.

The documentary does not just cover their individual case, but several others of homophobia and transphobia in the area. Through interviews with victims, aggressors and family members, we are shown a picture of an uncaring society, whose values are occasionally reproduced by parents and close relatives, We also see some cases of defiance and solidarity.

The drama aims to be more optimistic. It shows what might have happened if Swapa and Sucheta had fled their village and attempted to build a new life in the partial shelter offered by a Hindu-Muslim couple. They must still cope with a homophobic society, but at least they are offered a sliver of hope.

The films were made by queer and feminist activists from the Global South and are the result of a fact finding mission talking to people in the region. It does not paint a pretty picture, but it does attempt to explain both the suffering of the victims of homophobia and the motivation of their persecutors, who often can try to justify their prejudice by homophobic laws which date back to colonial times, but are still on the statute books.

Above all, the films aim at a Universalism which locates homophobia and sexism not in backward West Bengali society but as a global phenomenon. One interviewee explains that many homophobes in West Bengal try to justify themselves by arguing that homosexuality is a Western import, or only exists in cities. The truth is that LGBT people – and homophobia – are everywhere.

These films are thus in a different league qualitatively to some of this years “anti-sexist” films conceived by Western liberals, including Only a Women (from Germany) and What have we done to deserve this? (from Austria). These films – about “honour killings” and the headscarf respectively – attempt a “progressive” critique of sexism, but end up just blaming Islam and show no understanding of their subjects.

In contrast to those contributions by White Western Women, these films are written and directed by people who have an intimate understanding of oppression in the area. They are campaigning films, which are actively intervening to change society, but locate the struggle as part of a wider international fight. In the drama, a woman asks her lesbian charge whether this means she fancies all women, including her daughter. This may reveal ignorance, but these are prejudices which are also held by many contemporary Western City dwellers.

I retain one reservation, and this is not to do with the films themselves, but with the context in which they are shown. These are righteous films, which intend to change people’s opinions, and I can see them having great effect in West Bengal. I am, however, worried about what sort of film a Western audience will choose to see.

We see many authentic shots of dark skinned people, many of whom are wearing traditional clothing, in front of exotic landscapes, explaining unforgivable intolerance and the lack of support offered by close friends and family. For a Western audience, schooled to think that “we” are more progressive than the backward Global South, will they see the universality in these heinous events, or will they feel further justified in feeling that these problems are nothing to do with us?

If the second answer is more likely (and I fear it is) this is not the fault of the films, and certainly no reason not to see them, but it does make you slightly question your faith in society. Good to know then, that bigotry has always been challenged by solidarity, and that any discussion around these films is part of a more general conversation about the sort of society we’d like to live in.

The films do not carry high production values, nor could they on their low budget, but they contain an authenticity and integrity that is missing from most Megabucks Blockbusters. Not sure how easy it will be to catch, but is worth a go if you can.