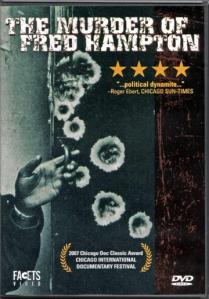 Illinois, the late 1960s. A young speaker extols the virtues of the Black Panther Party. You’d guess that he’d had some religious upbringing – his talk has the fervent cadences of a preacher, and he coolly employs call and response to keep the audience involved. Yet the message is less God than revolutionary socialism, with a bit of Mao thrown in.

This is Fred Hampton, referred to by everyone as Chairman Fred. Chairman Fred is barely out of his teens. He’s already done time – over 2 years for stealing $71 worth of ice cream. Asked about his previous he says with a smirk that if he did do it, it was a Robin Hood like act and any profits went to the poor and deserving.

Hampton is already chair of the Illinois chapter of the Black Panther Party and he is a compelling orator. But he doesn’t just offer revolutionary rhetoric. Filmed talking to activists who want to merge their organisation with the Panthers, he warns them against just talking left and neglecting Education (you might say, no revolutionary practise without revolutionary theory).

He is also very critical of Black Nationalism, warning that if you just try to gain black leaders, you end up with Idi Amin, Hampton explains how the Panthers were actively seeking out partners of other races who shared their perspective of fighting capitalism and imperialism. Later we see footage of him praising both Black Power and White Power, but I guess that meant something different then.

The film emphasizes how the Panthers were rooted in the community – citing the free breakfasts for kids and medical centres which “aim to take the profit out of medicine”. As the camera pans through a centre offering breakfasts, one of the kids lifts his fist out and says “socialism”. We see how the Panthers’ political practise won them ideological credibility and hegemony,

The film meanders around various Panther meetings and community actions, and then, about half way through, it takes a radical shift. This was necessary because reality took a radical shift. Howard Alk and Mike Gray started making a documentary about a charismatic activist and community leader and then the police went and shot him. Suddenly we have us a murder mystery.

Here’s what probably happened. One morning, the Chicago police (you may know us for beating up protestors outside the 1968 Democrat Convention) raided a house where Hampton was sleeping on the pretext that it contained a cache of arms. No one disputes that there were weapons in the building – this was perfectly legal, and the Panthers made a show of defending themselves and their community with arms if necessary.

During the raid, the police fatally shot Hampton as he lay in bed. He was 21 years old. They claimed that this was in self defence, and that when they tried to enter the building, the Panthers shot at them. Yet forensic evidence found 99 bullet holes from guns shot by the police and only one in the other direction. And if that single shot was the opening round, how to explain the police claim that three times they offered a ceasefire but were shot at again?

There is an extra point that isn’t covered by the film, as it only became known after the film was released in 1971. Hampton’s head of security was an FBI informant, who drugged him the night before the murder. From this point on, the Black Panthers gradually lost their standing in the community and were subject to increasing state repression. There is a film to be made about what happened next.

This isn’t that film, and while subsequent events were covered to a degree by the flawed “Panther”, I hope that someone will produce something that spends more time on the consequences of Hampton’s murder. In the meantime we have The Murder of Fred Hampton – of which you can make all sorts of criticisms. The picture is often fuzzy, the participants often mumble and the structure is terrible. You often long for a narrator’s voice to tell you what is going on.

And yet for all its faults, this film is able to deliver what few documentaries are able to – as it was in the right place at the right time. Other directors may have told the story better, but Alk and Gray were actually there and were literally the only people who could create this film which is a piece of living history.

If you judge this film on cinematic terms, it really is nothing special. But if you see it for what it is, it is absolutely fascinating. The story of Fred Hampton is rarely taught any more (if indeed it ever was), and yet it was a crucial turning point which made a large contribution towards the suppression of a genuinely radical movement. Some reviews say that you need more background reading to fully appreciate what’s going on, but that’s not a bad thing. Do that reading, its important.