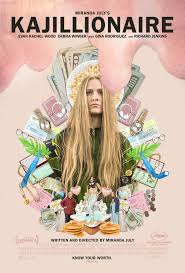 A bus stop. Los Angeles. A bus arrives, and everyone gets on. Everyone apart from 3 people, all standing apart from each other. They look around, making a couple of false starts as people walk past. Then the girl with long hair (actually, we learn, a 26 year old woman with long hair) makes some acrobatic leaps to avoid the security cameras, opens a post office box with a key, then puts her arm through to steal parcels on the other side.

If you’ve seen the trailer you know this scene already, although for some irrational reason, the trailer provides an irritating voiceover. In the film proper, it’s much more elegant. When it’s over the girl (actually 26 year old woman) with long hair goes back to the others, with whom she shares the spoils, with everyone getting a third.

We learn that the girl is called Old Dolio (a name given to her when someone of that name won the lottery, with the hope he’d bequeath his inheritance. Unfortunately he spent it on expensive cancer treatment) and the other two are her parents. Old Dolio has the earnest, shy look of a teenager and is forever avoiding eye contact and looking as if the burden of the world is on her shoulders.

We follow the trio through various scams, one of which involves them flying to New York and back on the same day. On the flight back, Old Dolio travels separately, so the others can pick up her luggage and she can claim on the insurance. It is here that they pick up Melanie, an effervescent Puerto Rican woman who takes each adventure as it comes – apparently the polar opposite to Old Dolio.

This is a film of two halves, and I found the first half, where they carry out minor scams (nothing too large as that may draw attention) to be the more satisfying. They win low-level lottery prizes under assumed names, return “lost” items to their owners to claim the reward, and, with Melanie in tow, visit her lonely clients (she’s an optometrist’s assistant) and steal their cheque books.

This part of the film is almost entirely frivolous (from which it benefits) but it does manage to land one much more serious punch. As they prepare a job which might just not work, Melanie reminds them that if things go wrong, they’d likely get a slap on the wrist. As a Latina in today’s USA, the consequences for her could be much more grim. This is not all just silly tricks.

In the second half, Old Dolio is triggered by her mother calling Melanie “Hon”, a phrase that she’s never heard used about herself, and tries to come to terms with her parents’ apparent emotional indifference to her. Now I don’t think that this is uninteresting in itself, it’s just that the film seems to offer two contradictory explanations, which makes the artistic impact less satisfying.

On the one hand, Old Dolio’s parents are not interested in trivial and phoney gestures of affection, like giving presents wrapped in bows and using baby language. Her father explains that he never treated her as a child, as that just seemed patronising. Now some people may find this a bit weird but – and I refer you to my own parents on this – it is not necessarily the sign of deliberate neglect.

On the other hand, it’s suggested that Old Dolio’s parents don’t expend emotion on her because everything’s down to the bottom line. The splitting the profits three ways is not down to egalitarianism, but to financial efficiency. This, which is contained in some late scenes which I can’t describe because of Plot Spoilers, puts the parents in a much more malign light, which feels a bit too mean for an otherwise joyous film.

Until the ending, the film revels in its silliness. I cannot put into words why Old Dolio effectively limbo dancing instead of bending down is so funny to me – it just is. And the fact that they live in an annexe to the Bubbles Inc. factory which leaks red bubbles through the walls twice a day (three times on bad days) can be seen as either irritating “quirkiness” or gleeful fun. I was minded to enjoy the frivolity.

I can fully understand people losing their patience with Kajillionaire – it absolutely requires you to buy into the characters. I also do feel that it is much stronger when it is joking along than in describing difficult and awkward relationships. But come on. Let a bit of joy into your life. It’s well worth leaving your serious head at home and just enjoying the ride.