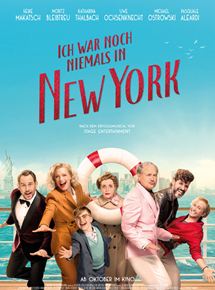 Lisa is a tv host and Powerfrau. We first see her fending off calls while driving to an Important meeting. One of the people ringing her is her mother, Maria, trying to wish her happy birthday. For reasons of Plot, Maria loses her memory and ends up on a cruise ship. Lisa and her camp make-up guy Fred try to get her off the ship, but it sets sail with them on board, next stop New York.

Cue a lot of singing and dancing, where people brush into passers by, causing them to perform a backward somersault. Yes, we’re in a musical, and not just any old musical but the bastard offspring – the jukebox musical. So whereas West Side Story had songs by Sondheim and Bernstein and Kiss me Kate Cole Porter, here we’re treated to the Schlager songs of Udo Jürgens.

Maybe a little info about Schlager music before we go on. Its the sort of music that they play at Bierfests when the audience is too drunk to resist. Fortunately Jürgens’s songs are low on oompah music, but they’re not exactly the highest form of art.

So, there were 100 reasons why the film should be dreadful, but I absolutely loved it. It takes itself the right level of serious (which is to say not much at all) but avoided the smugness of, say, Hail Caesar which contains great musical numbers, but you can’t avoid feeling that this is the Coen Brothers showing that they’re also able film dancing sailors. “Ich war noch niemals in New York” believes in what it is showing, and reminds us that kitsch is a German word.

So, where were we? Lisa, Maria and Fred get discovered and have to work their passage. Just this detail locates the film in some sort of movie past with technicolor scenery where people suddenly break into song. And who gets a cruise to New York nowadays? (the holy Greta excepted). Then, just as we’re wallowing in the 1950s nostalgia, someone brings out a Smartphone, or has a skype call or mentions Chemnitz (formerly known as Karl-Marx Stadt) and we’re brought back to the present.

During the 4-day trip, all 3 fall in love – Lisa with a widower with swotty son in tow, Maria with the first love of her life who she’s discovered for the first time in over 40 years. Since then, he has spent his life travelling while she delivered post. And Fred finds a swarthy conjuror with an indiscriminate accent who’s family wouldn’t accept Fred as their culture wasn’t great with gay relationships.

None of the love stories runs entirely to plan – but then again you knew that already. This is not a film that wins you through its innovative plot but through the sharpness of the characterization. Maria’s lost love is part of a double act of entertainers, who have clearly seen better days and now have to room together. His partner has a permatan and sparkling teeth and spends his days flirting with ageing women at the poolside. He absolutely looks the part.

Other incidental details also delight. The big dance numbers are spectacular, but often performed by people with normally shaped bodies. There is a running joke that Lisa’s love Axel is from Darmstadt, which is not the most glamorous of cities. Katharina Thalbach as Maria looks mischevious throughout, as only she can.

And sometimes the actors surprize you. Moritz Bleibtreu (a Proper Actor), as Axel, turns out to have a decent singing voice, Thalbach as Maria doesn’t, but this fits her character. If only the plot were not so thoroughly implausible (it remarks itself on its dependence on wild coincidences), you’d believe it really happened.

And you know what? As the film went on, I didn’t just get swept away by the paper-thin plot. I also started to enjoy the crappy songs. And though you pretty much knew everything that was going to happen, you ended up being moved by it all. Even by the greiving widow with his annoying brat.

This is a ridiculously optimistic film – at one point Maria says that the great thing about losing your memory is you can choose your own life. And the point that it makes is hardly original – that there are more important things than career and prejudiced family, and you should just follow your dreams. But it does it with such panache, that even someone with my cynical persona is forced to react emotionally.