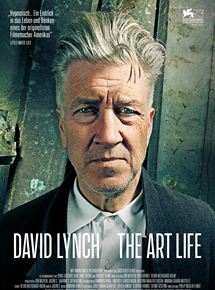 Still on holiday, but managed to catch this which is part of a series of films by and about David Lynch in the HOME cinema, Manchester. It was obviously divisive. For reasons that I don’t quite understand, as the film went on there was a steady and continuous stream of people leaving the cinema, at a rate that I don’t remember ever experiencing. Yet there was none of the obstinate inaccessibility that you get with some Lynch films, just him reminiscing about his life up to the filming of Eraserhead.

As Lynch amiably rambles on, you see a series of different backdrops. Sometimes he’s creating his readymade pieces of art, sometimes his old home movies, or photographs by him and his contemporaries. There’s some grainy film which may have been made at the time he is describing, or could have been added recently, it doesn’t really matter.

As we go on, anecdote follows anecdote. There’s his racist neighbour who smelt of piss and the time he shared a flat with Peter Wolf of the J Geils Band, which lasted till Lynch went to see Bob Dylan on marijuana and walked out – a cardinal sin in Wolf’s world. Or when he showed his father his cellar of decaying plants and animals, at which point his father advised him never to have children.

It’s all recounted without great emotion in Lynch’s genial style, sitting there in a white Morrissey quiff and a few too many bags under his eyes. There’s nothing fancy but there’s something soothing about sitting back, listening to his tales and watching a series of largely black and white images. It doesn’t offer many huge new insights, but not should it have to. Worth a watch (though if you were one of the many people who left early, please tell me why. I’m intrigued)