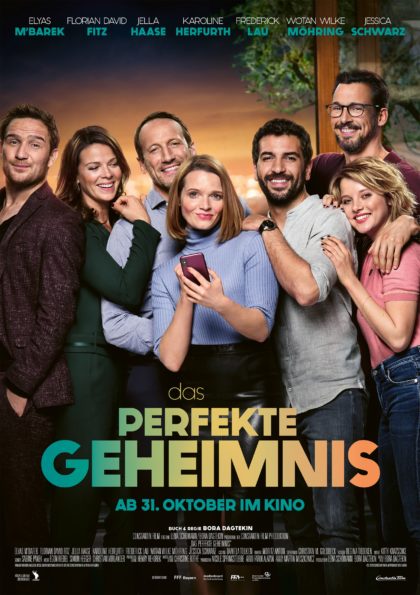 Its the night of the lunar eclipse, and Eva (a psychiatrist) and Rocco (a cosmetic surgeon) are having a dinner party in their opulent flat. 2 ½ couples turn up – Pepe says that his new girlfriend is sick, but you guess she might just be embarrassed of being seen in public with this ridiculous man-bun. It turns out that there’s a different reason entirely, but we’ll get to that later.

Desperate to avoid the tedious drudgery of most middle class dinner parties, Eva suggests a game. Everyone is to leave their smartphones on the table. Every message that comes in must be read out, and every call must be answered with the speakers on. You might guess what’s going to happen next, and you’d probably be right.

The next sentences may contain spoilers so if for some reason you want to go to the film and don’t have the imagination to work out what will happen, please skip to the next paragraph. Have they gone? Right. Over the course of the evening we hear about planned breast enlargements, inappropriate messages from minors, cocaine use, a gay relationship and a pregnant mistress. There was probably much more as well, but my small brain only has the capacity to retain so much information.

Are you back? ok. All you have to know is that the messages that come in start small and become increasingly extreme. Two people swap phones as each does not want to admit to the messages they expect to receive, leading to confusion and much hilarity (no, really. There were quite a few people at this evening’s showing who found the whole thing uproarious).

How to process this? Firstly, its a pretty neat idea. Apparently the Italian original of which this is a remake is only 3 years old and already the film with the most remakes ever. In the right hands, this could have been something like Roman Polanski’s Carnage, where odious privileged characters tear each other apart in front of our delighted eyes.

Yet the characters here, while certainly privileged, are more bland than odious. Rocco is even quite nice – the best scene of the film shows him tactfully advising his 14- year old daughter over the phone about whether she should lose her virginity. But I couldn’t raise enough emotion about most of the other characters to hate them and wish them ill. Which may be as well as its one of those films where everything works out in the end and everyone hugs each other.

Secondly, the film suffers from the Emmerdale plane crash syndrome. To understand this, we must take a brief diversion into the history of British soap opera. Emmerdale (nee Emmerdale Farm) was a long-running soap opera whose main plotlines focussed on important issues like sheep dip. In a desperate (but successful) attempt to gain a new audience, the soap introduced increasingly ridiculous story lines, leading to said plane crash, which had the happy by-product of removing many of the dead wood actors.

The problem was that sensation replaced drama. Whereas soaps had traditionally attempted to reproduce everyday life in all its quirky tedium, now everything revolved around spectacle. So, you might value it as entertainment but you couldn’t believe that what was being shown had any relationship to the real world.

Similarly, Das perfekte Geheimnis expects us to believe that this group of people (almost) all have deep secrets which could ruin their relationships, yet these secrets are known by others who not only could but do call them about it within a few hours on the same bloody evening. I wish that my daily phone conversations were one tenth as interesting.

To which could be argued, its a farce, it doesn’t have to pretend to be true. No, it doesn’t, but often the immensity of the problems we are shown does not match the hysteria. Granted, some of the revelations could kill a relationship, but how am I supposed to react when a rich woman screams that she wants to stay at home with the kids and for her husband to go out to his job as an architect but she can’t because of social pressure? My heart didn’t exactly bleed.

Out alienation from these self-absorbed characters with a sense of entitlement isn’t helped by the setting. As they are moaning about their largely first world problems, they’re eating posh food and knocking back expensive wine like there’s no tomorrow. And we’re supposed to be bothered about their feelings, why?

One final point. There is an instance of homophobia in the film which is handled with shocking insensitivity. The message seems to be, homophobia is bad, unless its from one of your mates in which case they’ve probably got a point. The fact that everyone loves each other in the end and it is never mentioned again only serves to normalise the bigotry.

This is not a bad film. It featured some of Germany’s most popular actors and certainly sections of the audience at my showing loved it. But it just utterly failed to engage me. I didn’t hate it, I just didn’t feel much at all.