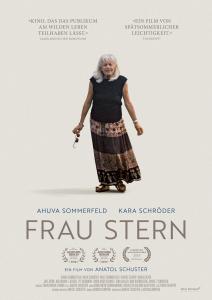 Frau Stern is pushing 90, still has all her faculties, but wants to die. She’s experienced enough already, including the holocaust, and while she’s not exactly tired of life, she’s done everything she needs to. The trouble is, none of her family is willing to help her shuffle off her mortal coil.

The film is about her search through Berlin of a way to kill herself. Except its not about that at all, really. We have music, and dancing – and actress Ahuva Sommerfeld twinkles throughout. At one point she is interviewed by a talk show host, who goes out of his way to patronise her.

I can see people getting a lot out of it, even though I couldn’t quite commit myself to the final step. I guess it is shocking to see a white haired old woman smoking a joint, but should it be really? And has the scene been introduced in a needy search of controversy? Too many of the scenes seem to have been introduced for reason of Plot, but the whole thing is too disjointed to truly cohere. This is not to deny the pervading amiability, but it never worked for me as a complete whole.

There was obviously a lot of improvisation going on and it had the air of a semi-documentary, but this just added to the feeling that I was slightly missing something here.

File under: maybe try again when you’re in a better mood