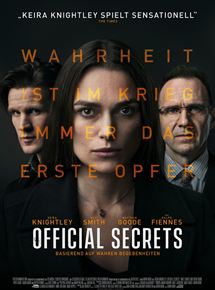 Katherine is a translator for GCHQ, the British government spy centre in Cheltenham. Her job is to listen to recordings of bugged telephone conversations and translate them from Mandarin to English. She is not one of nature’s radicals and – at least in Keira Knightley’s portayal – has the sort of accent you only get from a posh school (in her case, a Missionary school in South-East Asia)

[having said this, towards the end of the film we see archive footage of the real Katharine Gun, who sounds much more down-to-earth. But Knightley’s accent helps build a character whose politics were previously limited to shouting at the telly when the news is on].

One day, a memo arrives at work. Its the beginning of 2003 and Bush and Blair are pushing for war. The US National Security Agency has cordially asked GCHQ to dig up any possible dirt on the US Security members who might vote against a second resolution for war.

Katherine is outraged but doesn’t know what she can do. After all, she’s signed the Official Secrets Acts which prevents her talking to anyone about her work. Besides which, she’s not spending her evenings down at the local Stop the War rally. Eventually she pays a visit to an old friend who she remembers was an anti-war activist.

The friend’s first advice is to stick her fingers in her ears, sing loudly and pretend that none of this is happening. The reaction of her husband – a Turkish Kurd whose right to stay in Britain is unclear – is similar. But Katharine has a conscience. And – something which I think is slightly underplayed – there are millions protesting against war, which inspires her to act.

Eventually, with a little help from her friend and from the activist-journalist Yvonne Ridley, she smuggles a copy of the memo to the Observer newspaper, then as now a member of the Blairite Guardian media group. The newspaper’s top brass are reluctant to handle the story, worried that it might jeopardize their relationship with Tony, but there are still some decent journalists on the paper.

One of these journalists, as it happens, is Ed Vuillamy – all unkempt and sweary in a pantomime performance by Rhys Ifans, He is lots of fun, but works more as light relief while other people drag the plot forward.

Unlike their management, the Observer’s staff almost universally support the paper’s campaign for the still anonymous Katharine, even though the paper bosses keep reiterating their pro-war stance. Then an office junior puts an article through a spell check and the lack of US-American spelling is taken as proof that the memo is a fake. The suits regain control.

Katherine is by now unwilling to let the story disappear. She confesses and is immediately jailed. The State falls on her with its full force. Her husband is nearly deported and the Official Secrets Act is dragged out to prevent her from even talking to her lawyers about the case.

On occasion, the dialogue is risible, chosen only to push the exposition along. “What was that ship that Thatcher torpedoed?” and “Who was the journalist who exposed it?” are questions that you might reasonably expect to hear in a pub quiz, but not uttered by Shami Chakrabarti. But on the whole, the film successfully juggles the 3 stories of Katherine, her lawyers and the few remaining principled journalists on the Observer.

I must admit to not having too high hopes for this film (when a friend asked what I was going to see, I said I couldn’t remember the name but the time and place were useful for my evening plans). In addition its a format that often doesn’t work – too recent to be a historical film but far enough in the past to avoid talking about current events. Often films like this just tell you about what you already know while not offering any really interesting insights.

Well, not this time. I was hardly an uninterested observer of the events being shown. At the time of the main part of the film, I was organising a series of public meetings with one of the film’s protagonists, Yvonne Ridley. Yet even I couldn’t remember how things worked out in the end. This is either a testament to the onset of senility or the fact that a truly groundbreaking court case was woefully underreported.

And although its set 15 years ago, it could hardly be more relevant. A prime minister who’s addicted to lying. A liberal media which is hamstrung by its awe for Tony Blair and all he represents. And, at a time when some are tempted to say that all politicians are the same, a welcome reminder of everything that Jeremy Corbyn is not and never was.

I went in expecting to be mildly diverted. I ended up thoroughly enjoying myself.