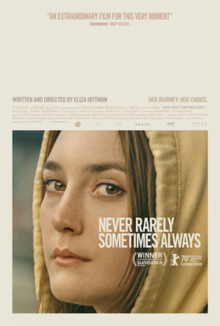 A talent show at a US high school. After the obligatory Elvis impersonator and a cappella group, a woman with sparkly eye liner strides on with an acoustic guitar. She sings “He’s got the power”, stressing the lines “He makes me do things I don’t want to do. He makes me say things I don’t want to say.” What was originally a girl group standard sounds like something that Alanis Morissette would turn down for being too intense.

From a gaggle of lads in the audience, someone shouts the word “slut”. The song halts, and the singer looks like she’s going to break down. Then she grits her teeth and carries on, twice as determined as before. Eating a meal afterwards with her family, she looks distracted and uninvolved. Then a lad leers at her and she leaves the restaurant, pausing only to throw his drink in his face.

Autumn is 17 and is going through a truculent phase. She can’t talk to her family – after the “slut” incident, her father uses the same word when playing with the family dog. What would he understand? What’s more, her periods are irregular. A clinic confirms that she’s pregnant. The friendly elderly woman on reception asks her what her plans are and whether she’s considering having an abortion. When she says that she’s not sure yet, the woman shows her a video which screams that all women who have an abortion are murderers.

Autumn turns to google, and finds that as she lives in Pennsylvania, she’s unable to get an abortion without involving her parents. She also finds a few online suggestions for inducing an abortion, none of which causes more than severe bruising around her stomach. Fortunately, her cousin, and only apparent friend, Skylar manages to skim enough money off the supermarket where they both work to pay for two coach tickets to New York, where the rules are more lax.

The abortion clinic in Brooklyn say that Autumn is too far gone to be treated by them, but refers her to their partners in Manhattan. She can’t be admitted till the next day, though. It’s also a two-day process, which means 3 days and nights living on the streets of New York, jumping the transit barriers and evading the flashers on the trains.

I was expecting to enjoy this film for its good politics – and indeed I did. It foregrounds one of the most important political issues of our age and shines a spotlight on how pregnant girls have been let down by a system that sees their lives as being of less value than that of a foetus. What I didn’t anticipate is that how much this would also work as a piece of art.

The film is driven by the relationship between Autumn and Skylar. Skylar is a little more outgoing, but they are both young women struggling to cope in an uncaring world. And though they offer each other tremendous support and solidarity, this doesn’t mean that everything runs perfectly between them. At one stage, Autumn tells Skylar to fuck off, as she just needs to be left on her own.

Looked at from a purely logical sense, Autumn sabotages herself more than once. She rejects Skylar when she needs her most and, when the woman at the reproductive rights centre offers help finding free accommodation, she lies and says they’ve got it covered. This is an act of pride, but Autumn needs some pride to retain a sense of self-worth when she feels totally powerless otherwise.

Throughout the film, Autumn struggles to keep her head above water, and attempts to help her only serve to drag her down. In the scene from which the film’s title is taken, a sympathetic councillor asks about Autumn’s sexual history. The questions are asked to protect her, but all they do is bring back traumatising memories of an abusive relationship.

Most films about abortion are based, one way or other, on the idea that having an abortion involves a “difficult decision”. Well, for many women it does, but others know from the start that they are unable or unwilling to bring up an unwanted child. Autumn is one of these women, and it is refreshing to see the story of a choice to remove a foetus that is not drenched with anguish.

At the same time, Never, Rarely, Sometimes, Always is not a propagandist film. We briefly see “pro-Life” demonstrators, but they are not ridiculed. Instead we are simply shown a life which would be ruined without the option of abortion. At the same time, we have more fun than in most intense “issues” films. The characters are believable, and we share their good moments as well as the bad – from out-of-tune karaoke to losing a game of noughts and crosses to a mechanical bird.

One of the films of the year so far. Don’t miss it.